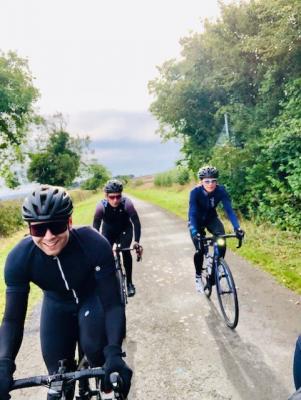 A Cambridge company has recently invited its employees to take part in an Activity Weekend, exercising in their preferred sport and raising funds for two UK charities.

Thirty one Domino UK employees and their families took part in the virtual event, travelling the equivalent distance between the company’s sites in Bar Hill Cambridgeshire, Liverpool and Stirling. Over the two days, a combined total of 655 miles and 144 hours of activity were clocked up.

Not only were the participants promoting well-being and health, they also raised a total of  £1,300 which was match-funded by Domino to give a total of £2,600 to be shared between the MS Society and FND Hope which supports those with Functional Neurological Disorder.

Both charities were close to the heart of two former Domino employees who have been diagnosed with the conditions.

Rachael Satchwell, Head of UK Sales at Domino said: “This was an inspiring initiative which allowed staff from all our UK sites to take part with their families. Not only did it provide an incentive to get out and exercise in the fresh air, it also raised valuable funds for two important charities. We hope to make it an annual event.”

Founded in 1978, Domino Printing Sciences plc, has established a global reputation for the continual development and manufacture of its total coding and printing technologies that meet the needs of manufacturers and sets new industry standards in quality and reliability.