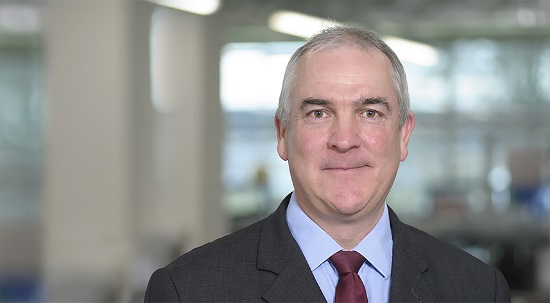 Christoph Wiesner is stepping down from his position as TWI Chief Executive this year, a role he has held since 2010. The past nine years have seen many changes, both within TWI and across the industries it serves. But TWI has tackled the challenges arising from these and has moved forward into promising new directions whilst maintaining the key positives of the past.

During Christoph’s time, TWI has markedly improved its processes to attract funding from both the UK and EU governments. We remain dedicated to our Members, and have balanced public funded R&D with continuous development of new technologies that will benefit Members and industry as a whole, as well as stimulating our own progress. This was achieved through the success of TWI’s core research and collaborative projects and supported by establishing closer ties to universities.

With the creation of a number of Innovation Centres, TWI has been able to leverage these university ties to share knowledge, provide expertise in the funding environment and offer physical space, the latest equipment and technology for our work for Members.

Keeping everything on site at TWI created an interactive R&D environment that has clear benefits for Members, while attracting increasing funding over the past ten years or so. Public funding has risen from around £2 million per year in the mid-1990s to around £15 million today, underpinning growth of Industrial Member contract business from £15m to £25m during Christoph’s tenure.

This was set against a backdrop of expansion for TWI itself, as Christoph oversaw a growth in staff numbers of more than 200 and the upgrade of TWI’s headquarters with three new buildings being erected and ready for use in 2015.

Christoph emphasises that this success would not have been possible without the TWI people and the friendly and interactive culture that exists at TWI. This is something that he has always been keen to maintain by keeping company traditions alive, and by trying to be present and approachable for employees. This determination to create a positive working environment extended to Christoph’s desire for everyone at TWI to stay people focussed, inquisitive and welcoming whilst delivering on the commitments we make.

Managing TWI’s intelligent, highly qualified and challenging people has always been an important part of the Chief Executive’s job, but was something that Christoph seemed to enjoy, respecting the opinions of others and responding to the questions and ideas presented to him.

However, Christoph’s time has not been without its problems. The economic climate of the 2010s meant that TWI was increasingly pushed to demonstrate value for its Industrial Membership product, this led to changing relationships with an increasing number of Members, working closer and more strategically with both them and government to develop win-win leverage for both private and public partners.

There was also a necessity to further broaden the industrial appeal of TWI, making the business less reliant on the oil and gas industry as the last few years saw a decline in oil prices. This fall in oil prices also had a temporary knock-on effect on the demand for TWI’s training products, both in the UK and internationally, which had to be countered. It is testament to Christoph’s leadership that TWI has continued to operate and flourish where several other non-grant maintained UK research and technology organisations folded or were sold.

Christoph’s decision to step down from his role may have been a surprise to some, but it was always something that he had planned, explaining that he felt that every company benefits from a new vision and a fresh pair of eyes after a decade or so. However, this doesn’t mean that he won’t stay in contact with the work of TWI.

There will be a hand-over period with incoming Chief Executive Aamir Khalid and Christoph will also be available in an advisory capacity. Furthermore, he is looking forward to returning to complete some technical work of his own – something that he didn’t have time for while he was Chief Executive.

With regard to his successor, Christoph said that he was delighted that an internal candidate had been chosen. He added that Aamir’s 20 years at TWI has given him a strong understanding of the business, its people and culture, while also providing a trusted network of colleagues who will tell him the truth regardless of his position.

Christoph stressed that whilst Aamir may have a reputation for financial focus, he knows that he is deeply interested in our technology development and its exploitation. Combined with his great talent in business and commercial matters, Christoph is convinced that TWI’s future will be in very good hands.

While we must look forward, let’s take a moment to celebrate the success of his time at TWI and wish Christoph all the best for the future.