An Addenbrooke’s emergency doctor, who fled Syria as a medical student in 2012, has just returned from Ukraine where he helped treat those fleeing from the war. 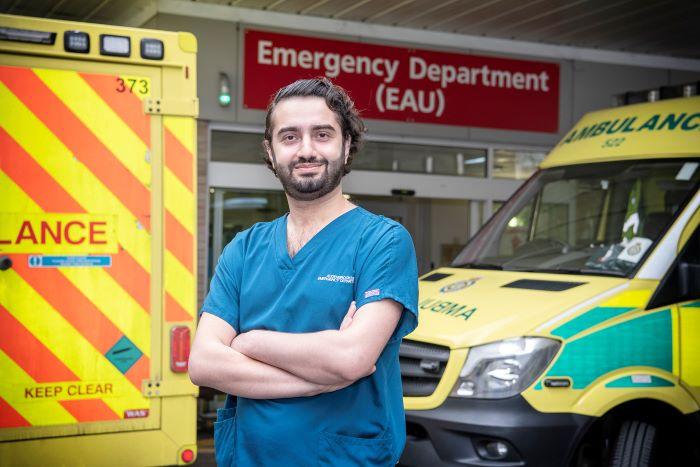 Tirej Brimo, a Kurd, was in the final year of medical school at Aleppo University when he made his escape. Just a year later part of the university was destroyed by shelling.

He fled to Lebanon, and crisscrossed the Middle East before finally arriving in Britain in 2013 as a refugee. He graduated as a doctor at St George’s Medical School in London 2017. His journey to become a doctor, took him through four countries, four medical schools, 10 cities and 21 homes.

For seven weeks this April and May Tirej used his annual leave to volunteer with a medical team in Ukraine. He initially worked at two border crossings where thousands of people were queuing every day to cross the border out of Ukraine into Poland. Then he moved to Lviv city, in Western Ukraine, where he helped to establish a medical clinic near the main train station. Its vital work continues today.

Each day trains would arrive from the eastern front, full of people fleeing the war. They dealt with everything from minor ailments to wounds and emergencies – but could do little to relieve the shock and grief of patients.

Tirej said: “At Lviv train station, the situation was horrid. Every day we got dozens of trains from Eastern Ukraine - trains full of injured people, and trains full of refugees who just wanted to flee and leave everything behind.

“In our clinic we mainly looked after people escaping the war and the locals. We tried our best in to provide as much aid as possible, whether it was medical aid or humanitarian aid.

“When I first arrived to Lviv, I was surprised that air raid sirens didn’t get people’s attention anymore. They walked in the streets as if these sirens didn’t exist. It is only when you looked in detail the impact of war could be observed - overcrowded streets, schools full of refugees and ambulances working day and night.

“In my very first week, a paramedic and I saw 339 patients. Presentations could vary from simple over the counter medication, to complex wounds and emergencies. However, burdened faces and tearful eyes were what the majority of our patients brought into the consultation room.

“It only took a few seconds into the consultation for these emotions to come out. They had been through a lot, they had seen a lot. Some of them lost their loved ones, some of them left everything behind, and some of them were so in shock that they were not aware what was happening around them.

“It was really difficult when people came into the train station to collect relatives who had died in the conflict – a father, a sister. As a doctor, this is where I felt most helpless.

“We tried to connect with them as patients, but also on individual basis as humans. We hugged them, we cared for them - and we tried our best to look after ourselves as well. It brought out a lot of emotion in us. It saddened us to see this situation.”

Reflecting on his work in the train station, Tirej added: “Amid this difficult situation hundreds of good-hearted volunteers tried their absolute best to make life a little bit easier for their fellow humans. In a clear message of resilience and rejection of war and its violence, we started our day with a smile and we ended our day with a prayer. A prayer that we hope one day will be heard.”

Recalling his experience fleeing the war in Syria, Tirej said, “In the Syrian war 10 years ago, I ran away. I was a student and felt helpless. In Ukraine, I chose a different destiny. I chose to be there and stand up for what I believe in.

“Sadly, the atrocities of war are similar. The horror in peoples' faces, back packs that have been filled in a rush, and children who have lost their spark, are some of the images that stay with me. War is like a nightmare you can't wake up from, while praying for a miracle that just doesn't happen.”

Tirej, who has volunteered in the Greek Islands’ refugee camps multiple times since his graduation as a doctor, said: “As a doctor in the humanitarian world, our fight is different. We look after those wounded by all kinds of trauma, those who have been forgotten about, those who feel rejected by life and its atrocities.

“We hope that these few minutes of care will one day be a remembered as a small light in our patients’ journey. Their journey to heal from all that happened.”

“I am grateful to my emergency department colleagues at Addenbrooke’s hospital. Their support and understanding for my needs to fulfil my humanitarian duties, has been enormous. And now that I am back to the UK, I am ready to give 100 per cent to my department, my hospital and the NHS.”

A group from Addenbrooke’s Hospital and the University of Cambridge has developed video tutorials for colleagues in Ukraine to help them manage trauma cases during the conflict.

Now clinicians can choose from Ukrainian language films on everything from basic life support and limb injuries to haemorrhage and triaging sick children.

To find out more and to help, see https://www.gov.uk/government/news/ukraine-what-you-can-do-to-help and Cambridge Global Health Partnerships https://cambridgeghp.org/ 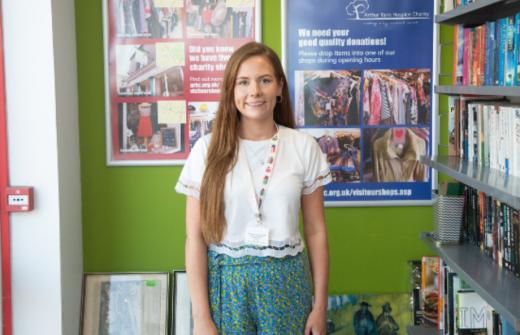