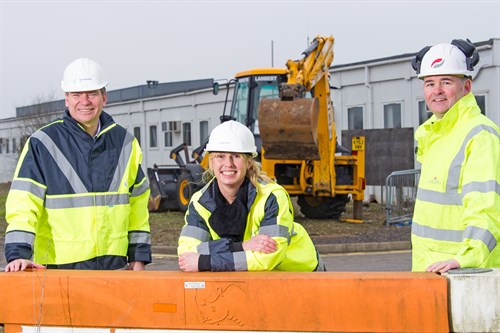 Construction work has begun on a £500,000 airport themed education centre that is set to boost skills across science, technology, engineering and maths subjects (STEM).

Stansted Airport’s Aerozone will offer tailored STEM activities designed to give youngsters from local schools, colleges and community groups a taster of airport life and an insight into the variety of careers on offer across the site.   The airport’s Head of Construction and Development, Matt Allen, marked the occasion by turning the first sod of soil this week. He was joined by Aerozone Education Co-ordinator Joanne Davies and Bernie Kelly of Galliford Try - the company constructing the centre.

Matt said:   “Engaging with young people, particularly those living in areas close to the airport, is a vital part of our community work. We want to encourage and inspire young people to think about what the airport does, why it does it, and the career opportunities that could be available to them in the future.   “We recognise the growing importance of tackling youth unemployment and we’ve already implemented a range of initiatives and projects to support young people into jobs at the airport. With high youth unemployment across the UK and a shortage of local skilled employees, the Aerozone along with our existing employment academy will equip future employees with skills that will help them find work, either at airports or with another employer.”   An old administration building adjacent to the airfield is being completely refurbished to house the classrooms while the surrounding area will be landscaped to include picnic, viewing and parking areas. There will also be space dedicated to the airport’s history that will include photos and artefacts dating back to the Second World War when Stansted began life as a U.S. Air Force base.

Earlier this year the airport launched its Community Network initiative which encourages local businesses to take part in airport community projects. Many have signed up and are supporting the Aerozone project, offering sponsorship and materials to kit out the centre.

“Within three years we aim to attract over 5,000 visitors each year to the Aerozone,”said Joanne Davies, the centre’s coordinator. “We also want to boost workplace volunteering and we will be encouraging airport employees via our Community Network initiative to get involved and give talks to groups about their careers and experiences,” added Joanne.