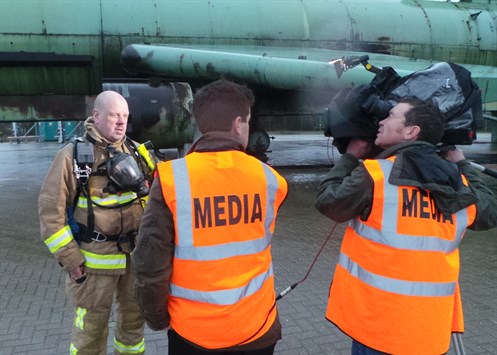 A Stansted Airport fire-fighter who has devoted 30 years coaching karate in his spare time has been nominated for a BBC Look East Sports Personality award.

Andrew Turner, from Dunmow in Essex, is competing against other volunteers from across the region for the Unsung Sporting Hero Award for 2014. The honour is awarded to an individual who has carried out outstanding work in their local sporting communities.

Andrew has been teaching at the Dunmow Kyokushinkai Karate Club since the 80s, and the junior and cadet GB team for 15 years steering them to world, European and national titles. He does all this in his spare time and juggles his passion for karate with his day job as a fire-fighter at London Stansted Airport.

Andrew Turner said: "It was a massive shock to find out I’d been nominated for the award. I’m very flattered and really appreciate all the kind comments from everyone as part of the nomination. I do it because I love Karate and I get a great pleasure out of seeing kids develop and grow into good Karateka’s and nice people."

Red Watch Station Manager at Stansted Airport, Daniel Crick, said: "Andrew’s a great character and a hugely popular member of the airport’s fire service. He dedicates his time helping people and you never hear him boasting about his karate achievements, he just gets on with the job and always gives 100%. I don’t know how he juggles work, karate and his home life and most of his annual leave is taken up so he can coach. He’s a real inspiration to all of us and everyone here is keeping their fingers crossed he picks up this award."

A BBC crew visited the airport this week to film a profile piece of Andrew doing his day job as a fire-fighter and the winner of the award will be announced on Friday’s BBC Look East. The winner will then go on to the BBC Sports Personality of the Year Awards in Glasgow on December 14, along with other regional finalists.