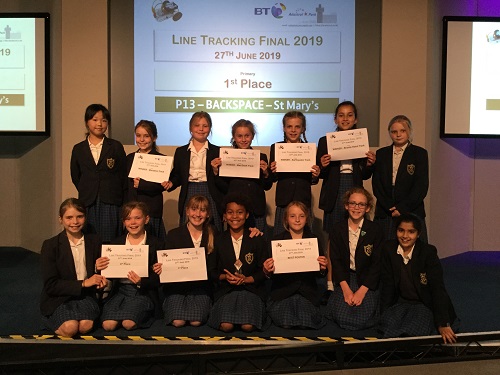 Girls from St Mary’s Junior School, Cambridge, have proved that ‘Yes She Can’, with a string of national and international successes in prestigious robotics competitions.

Following on from success at the RoboCupJunior European Robotics Championship, in which four 11-year-old girls reached the quarter finals after beating several teams aged 14-18, 15 of their Year 6 girls competed in the RoboCupJunior UK National Primary CoSpace Finals on Wednesday 26 June.

After competing in an unseen Technical Challenge, Technical Interviews, Poster Presentations and a nerve-wracking series of competition rounds, they discovered that two of their teams would be competing against each other in the Grand Final. After a tense match to decide the final positions, the St Mary’s all-girls teams dominated the podium; one team was crowned UK National Primary CoSpace champions, while their other team was awarded 2nd place.

The following day, on 27 June, Year 5 girls from St Mary’s also triumphed at the RoboCupJunior Line Tracking UK National Primary Finals, with one team taking 1st place, while the other team was awarded 4th place. The St Mary’s teams also received four Fastest Individual Track Awards. The girls had to program their CrumbleBot robots to follow a line around 12 separate and very varied courses, against the clock. They also completed a ‘Pursuit’ Challenge, similar to Olympic velodrome cycling events.

Mr. Andrew Severy, Computer Science Coordinator at St Mary’s Junior School, said: "I am incredibly proud of our teams and their achievements over what has been an amazing week of competitions. To follow our European Championship successes by becoming National Champions in two separate disciplines, is a truly remarkable achievement.

"All the girls have demonstrated incredible teamwork, commitment and maturity. They showed real determination and perseverance throughout the competitions and were particularly praised for their sporting attitude and enthusiasm.

"They richly deserve their success and I am confident that they have a great future ahead of them in the areas of STEM and Computer Science both at school and beyond".

Established on a founding vision which is over 400 years old, our educational provision continues to be tailored for girls.