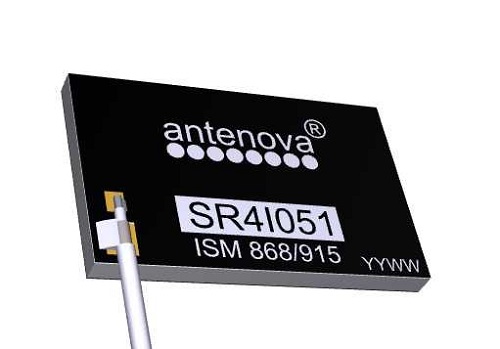 Antenova Ltd, manufacturer of antennas and RF antenna modules for M2M and the Internet of Things, has created a new version of its award-winning REFLECTOR antenna that operates on and close to metal surfaces.

The new antenna, which is only 1.6mm thick, is named Magna, part number SR4I051, and operates in the ISM 868/915 bands. This new antenna is designed for industrial IoT markets and in particular lighting.

Antenova’s new patented REFLECTOR antennas are thinner than other antennas that would usually be mounted on a metal surface. They use two electrical layers, one isolated from the other, which enables an antenna to radiate on a metal surface or housing where it is usually extremely difficult for an antenna to operate. The company’s first REFLECTOR antenna for smart cities attracted acclaim at Embedded World 2018 when it won the Embedded Hardware Award, one of only three awards given for innovations at that show. Antenova’s winning antenna is Robusta for the 1559-1609 MHz bands.

The new Magna antenna operates in the ISM frequencies at 868/915 MHz and is designed for applications in industrial IoT and smart buildings. It  comes with a cable and an IPEX connector and has an adhesive underside to fix it position inside a device.

Commenting, Antenova’s CEO, Colin Newman says: “The new Magna antenna has the advantage of working over longer distances than can be achieved at  868/915MHz, so it can be used out of doors or in large warehouses - it also operates on metal lighting and ceiling fittings. It’s perfect for very small light switches and energy saving applications.”

Most smart building and smart city applications need antennas for control. Antennas are used in switches and dimmers in commercial and residential property, and also in street lighting, traffic control and security. The market is expected to expand steadily as the impact of energy consumption on the environment is better understood and people turn to smart energy saving systems. US Analysts (Global Market Insights Inc. 12 April 2018) estimate that the Smart Lighting Market could grow at a CAGR of over 20% from 2018 to reach $24Bn in 2024.

Antenova will be showing samples of the Magna antenna at CES (Jan 8-11, 2019; Las Vegas, NV) , so for more information please visit Antenova at the show, booth #2220 in the Westgate hall, or visit www.antenova.com. The antennas will also be on view at the Embedded World exhibition in  Nuremberg in February.