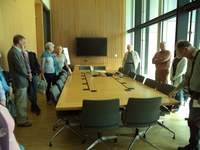 Dozens of people enjoyed tours of the Sainsbury Laboratory as part of Open Cambridge. The tours were given by architects from Stanton Williams and included an exploration of the conceptual ideas behind the design of the building as well as explanations of how materials were chosen and the building constructed.

Architecture was not the only focus of the day’s tours. Posters in the Atrium described scientific discoveries first made in plants, and highlighted several model species used in plant science research, including Nicotiana benthamiana, heavily involved in the development of the medication being used to treat Ebola. Visitors were invited to look carefully at seedlings grown at different temperatures and at a viewing box that made it possible to see how various species of plants develop their root systems.

After the tours, visitors were invited into the Board Room to take part in a series of thought experiments.  A particular highlight involved the visitors playing a game of ‘consequences’, plant style.  This involved folding a piece of paper into thirds, drawing a root system at the bottom of the page, then giving the folded paper to another person to draw the middle of plant without having seen the root illustration. The next person along would then draw the top of the plant, at which point the whole page would be unfolded to reveal some rather surreal illustrations. This was entertaining, but also led into discussions on plant shapes, developmental plasticity and grafting.

Feedback for the event was overwhelmingly positive.  Gavin Henderson from Stanton Williams said, ‘public engagement is an important part of what we do as architects, and it is a pleasure to participate.’  SLCU appreciates the opportunities Open Cambridge affords to open the Laboratory to the public. It provides another outlet, along with the Science Festival and Festival of Plants, to explain its research to a new audience. We look forward to participating in Open Cambridge next year.

Details of next year’s Open Cambridge will be posted on www.opencambridge.cam.ac.uk/ in due course.

The Sainsbury Laboratory Cambridge University (SLCU) is a new research institute funded by the Gatsby Foundation. The aim of the Laboratory is to elucidate the regulatory systems underlying plant growth and development.