A showcase of work of some of the world’s most exciting children’s book illustrators is about to go on display at Anglia Ruskin University (ARU) in Cambridge. The 20th anniversary of world-leading MA course will be celebrated at exhibition. 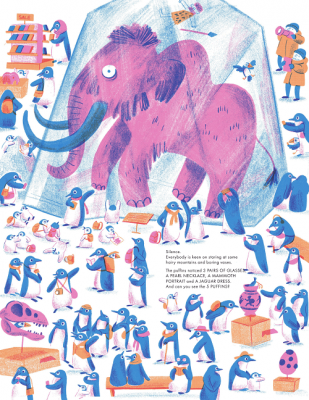 The exhibition includes work from all 54 MA Children’s Book Illustration students who will graduate in 2022, which marks 20 years of the world-renowned course that continues to attract some of the most talented illustrators from around the world.

This year’s graduate show exhibition includes work by Italian illustrator Jessica Ciccolone, who has been named as the winner of the annual Sebastian Walker Award for Illustration, which is presented by publishers Walker Books to the most promising ARU Children’s Book Illustration student of the year.

To mark the 20th anniversary, the private view of the exhibition on Thursday, 24 February (5-7pm) will include a special celebration of the course, which was established by Martin Salisbury, Professor of Illustration at ARU.

Professor Salisbury said: “Along with esteemed and much treasured visiting tutor, John Lawrence I looked forward to running this little course alongside my primary duties with the undergraduate course. Within a decade it had taken over my life as we became overrun with applications from all corners of the globe, thanks to the amazing achievements of our graduates, whose published works were becoming increasingly evident in bookshops. At one stage I counted students from 29 different countries.

“In celebrating this anniversary, I would like pay thanks to our wonderful teaching staff, permanent and visiting.  But most especially to my successor as Course Leader, Shelley Jackson, who has taken up the reins with such skill and grace and led the course to new heights.”

Commenting on the challenges faced by this year’s graduating students, Shelley Jackson, Course Leader for the MA in Children’s Book Illustration, said: “What a wild ride this amazing group of students has had. Nevertheless, they’ve tackled the challenges of being creative during a global pandemic with tenacity, making innovations and breakthroughs, developing touching narratives and creating beautiful artwork.

“A graduate’s debut picturebook spent nine weeks on The New York Times’ Best Sellers List, including two weeks as the top-selling children’s book in the US. Graduates won two of three Special Mention Awards at the Golden Pinwheel Young Illustrators Competition. A student was the AOI’s World Illustration Awards New Talent category winner in Children’s Publishing, while 18 of the 25 Macmillan Prize winners were MA CBI students, including second and third place. The 2020-21 Batsford Prize saw seven students shortlisted, with one winning the Children’s Book category and four runners-up in Children’s Book, Illustration, and People’s Choice.

“This year also saw us launch the Inclusivity Bursary & Mentorship for a student from a group underrepresented in children’s books, and I would like to thank our mentorship partner Picture Hooks, along with those who have generously contributed to this award.”

And graduates from the course continue to receive national plaudits. Only this month, Mark McKinley was shortlisted for the prestigious Waterstones Children’s Book Prize 2022 for his illustrations for The Viking Who Liked Icing, written by Lu Fraser, while 11 of the 24 illustrators to feature on the longlist for the 2022 Klaus Flugge Prize longlist are ARU Children's Book Illustration graduates.

The MA Children's Book Illustration Graduate Show exhibition, which is open to the public and free to attend, runs from 23 February until 3 March in the Ruskin Gallery on ARU’s Cambridge campus.