A bereaved couple are taking on a gruelling three-day cycle challenge in memory of their “beautiful, funny and loving” son. 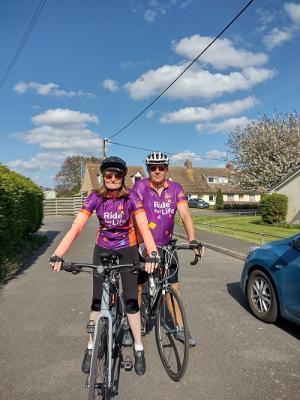 “It’s payback for the care and support we received” - Henry and Jane say signing up for Ride for Life is their way of thanking EACH.

Henry and Jane Wright are training for next month’s 200-mile Ride for Life event, being organised by East Anglia’s Children’s Hospices (EACH). It takes cyclists from Snetterton to Ipswich and then onto Milton, before returning to Norfolk. All proceeds go to EACH, which provided end-of-life care for four-year-old Douglas before his death in February 2018. The charity then supported Jane, Henry and daughter Clara (then aged seven) and they say signing up is their way of saying thank you – a form of “payback”.

“There’s no getting away from the fact it’s going to be a real challenge,” said Henry, 54, who lives with his wife and daughter in Little Downham, near Ely.

“I did the London Marathon for CLIC Sargent (now Young Lives vs Cancer) in 2019.

“That was difficult but this is going to be a step up from that.

“It’s not so much day one I’m worried about. It’s days two and three!

“Having said that, we’re very excited about it.

“It’s going to be an adventure and taking part is our way of saying thank you to EACH.

“To some degree, it’s payback for the care and support we received as a family.

“I’m the first to admit I was very wrong about what a children’s hospice entails.

“I thought it was all about palliative care and essentially where someone goes to die. I didn’t know about all the other things EACH provides.

“The team were there for us at the end and have continued to be ever since.

“If I picked the phone up tomorrow, I’m certain help would be at hand.

“We’ve been to support groups, had bereavement counselling and Clara has attended sibling days, like the trip to Clip n’ Climb, in Cambridge.

“There wasn’t anyone at school she could speak to, so the sibling groups gave her an opportunity to chat to other brothers and sisters who had experienced something similar.”

Douglas had more than a year of treatment after being diagnosed with neuroblastoma - a rare type of cancer that mostly affects babies and young children. He was four years old when he died in February 2018.

“We’ve done a few training rides, although nothing like the ones we’re going to face next month,” said Jane, 47.

“We’ve set ourselves this challenge in memory of Douglas.

“We want to remember not just that he died but also that he lived.

“When he laughed, you couldn’t help but laugh with him.

“He was a beautiful, funny, loving, eccentric, strong-willed little boy and while no challenge will equal the challenge of living without him, we’re really stretching ourselves to cycle this far.

“The support from EACH was invaluable and we owe them a debt of gratitude we can never repay. They were there every step of the way and it’s not something we expected.

“At first it was alarming to be offered the services of a hospice when we were still hopeful treatment could cure Douglas.

“However, it was explained that children’s hospices don’t just offer end-of-life care.

“The hospices are eye-opening places but they’re certainly not depressing. Far from it. It’s not a clinical environment, like a hospital.

“The wonderful nurses visited us, often several times a day, and that support didn’t stop when Douglas died.

“They helped us with admin, thinking about funeral arrangements and then later with counselling and bereavement groups.

“That ongoing support has helped so much.”

It promises to be a real family affair as Team Douglas will also include Henry’s sister, Rebecca O’Connell, and soon-to-be brother-in-law Matt Felstead.