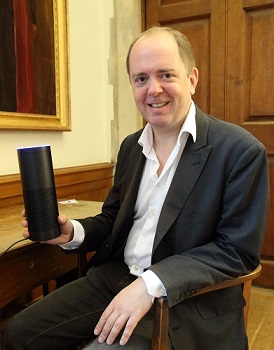 When Amazon acquired Cambridge-based Evi Technologies it also decided to invest in the city; building a large development centre to house the Evi Team and others such as Prime Air, in order to benefit from the entrepreneurial landscape. This is an example of a growing trend of multi-national companies attracted to the city, identified by the new book Cambridge Phenomenon: Global Impact.

Co-author Kate Kirk comments: “The Cambridge Phenomenon has reached a status of brain gain rather than brain drain.  Instead of early-stage technology companies being bought up by overseas companies and taken away from Cambridge, we are now seeing multinational companies using acquisitions as a way of becoming part of the Cambridge ecosystem. These ‘sticky acquisitions’ are a major indication of Cambridge’s success.”

Tunstall-Pedoe and his team became part of Amazon’s new European R&D laboratory headquartered in Cambridge and played a leading role in the development and launch of the new Amazon Echo, and the Alexa software that powers it.

He says: “Evi is a good example of a Cambridge start-up that has attracted millions of dollars of inward investment, providing a good return for our investors and creating many high value jobs in the cluster.

“Amazon’s investment in the technology has helped to secure the city’s position at the forefront of voice controlled computing.”

Amazon Echo has an impressive array of features; using the inbuilt Alexa Voice Service it can answer a wide variety of questions, play music from Spotify, read Kindle eBooks, report the weather and much more. Echo is also compatible with smart domestic devices, enabling voice control of lights and thermostats.

The ‘Internet of People’ is one of the future growth areas for the cluster identified within the new book ‘The Cambridge Phenomenon: Global Impact’ launched on the 1st June 2016.