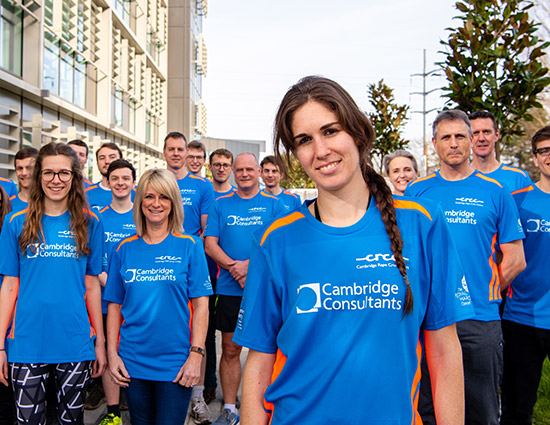 The Cambridge Consultants running contingent is limbering up for the Saucony Cambridge Half Marathon, as 40 employees join 10,000 runners taking on the 13-mile course on Sunday 3rd March. This is the fifth consecutive year that Cambridge Consultants has been a race sponsor, reflecting the company’s commitment to the city and the sporty nature of its workforce..

The Cambridge Consultants runners are raising money for three separate charities, all nominated by staff:

Every pound raised by the Cambridge Consultants runners will be matched by the company, providing a fundraising boost for the three charities.

Since the first event in 2012, the Saucony Cambridge Half Marathon has established itself as one of the UK’s biggest and most beautiful closed road half marathons. The flat, single loop 13.1 mile course will take runners of all abilities on a scenic tour of the beautiful city of Cambridge. Starting and finishing on Midsummer Common, the route winds through the centre of this historic university city, passing the Round Church, Kings College, Fitzwilliam Museum and The Backs, to name just a few Cambridge landmarks. The event continues to be extremely popular, as entries for this year sold out in just 24 hours.

The Cambridge Consultants runners will once again compete in electric blue and orange running tops. These distinctive tops have made the runners a recognisable part of the Cambridge running scene, as the team have trained through the cold winter months. Now those months of training and hard work will be put to the test.

“I’m delighted to continue our association with such a valuable community event. We’re proud of our city, and the half marathon is a great showcase for the iconic buildings and landmarks of Cambridge,” said Cambridge Consultants’ Global Marketing Director, Neil Gazeley. “I’d like to wish every runner the best of luck and hope that our runners raise lots of money for these vital charities”.