From escape rooms, robot racing, explosive demos and interactive games, to manga workshops, ugly animals, future fashion shows and punk music, this year’s Cambridge Festival has something to suit all ages and tastes. 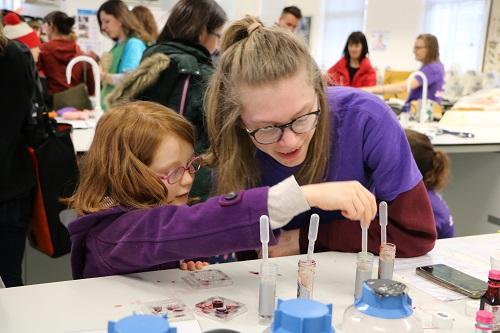 The full programme launches and bookings are now open.

Run by the University of Cambridge, the Cambridge Festival (31 March-10 April) is returning with a programme of gigantic proportions. There is so much for the entire family to see and do that choosing exactly which events to highlight is always a bit of an undertaking. The following is a small selection of what’s on offer for children, young people, and their families – almost all the events are completely free.

In the lead up to the big shebang, there are several community events taking place across the city. Storey’s Field Centre hosts a University of Cambridge Museums and Gurdon Institute hands-on showcase, Seeing Closer (15 March). Whether five or 85, everyone can get hands-on: learn about British butterflies and their habitats; find out how our prehistoric ancestors decorated their pottery; explore life through a microscope lens; make a camera obscura; and design an ancient Greek vase.

Cambridge Festival favourites, Crash, Bang, Squelch serve up some plain weird and wonderful science along with a series of robotic workshops at the Department of Zoology (19 March). On the same day, the Department of Engineering also opens its doors for a packed day of talks, demos, workshops, exhibitions, and lots of audience participation. Events include kite workshops and awesome robot displays.

The Cambridge Science Centre and the Whipple Museum also team up to present a series of exciting STEM activities at the Church Of The Good Shepherd during their event, Get hands-on! (22 March).

Once the Cambridge Festival kicks off, things get even busier with loads of events for children under 12. These include the daily Garden Egg Hunt at the Botanic Garden; the online science story, Maya’s Marvellous Medicine, which runs throughout the Festival with immunologist Professor Adrian Liston; mini manga workshops with artist Irina Richards (5 April), and fast-paced laser-guided robot racing (9 April).

One of the events tipped to be a favourite for young kids is the interactive family show, Covid for kids (2 April, in person) with Professor Tom Solomon. The show centres on the adventures of Corry the Coronavirus who travels around the world causing chaos and misery until she is brought under control by a team of Super Scientists. Along the way kids learn how and why viruses emerge, what happens in a pandemic, and how we can beat such threats in the future.

Other top tips for smaller children include the many in-person events at the University of Cambridge Museums. The Fitzwilliam Museum hosts a story-sharing session for pre-schoolers, Tots and teens telling tales (1 April). The Whipple Museum explains some little-known facts about Fiddly fungi (2, 4, 5 April). And the Museum of Zoology investigates the world of insects. During these events, kids can meet the insects (2 April); follow the Museum’s insect’s trail to find out about insects and plants, and how they evolve together (every day except 4 April); and experience insect sounds and sense during the workshop, Creating a buzz! (6 April).

Sticking with creepy crawlies, in the daily online event, Worms are cleverer than you think, kids can learn all about worms through a series of videos, games, and activities. Not to be outdone by insects and worms, the in-person show, Ugly animal preservation society with Simon Watt (2 April), celebrates and explores the incredible biology of the animal kingdom’s most monstrous sights.

Another unmissable show (with plenty of audience participation!) is the Wonders of the human body with Dr Jo Science: autism friendly (3 April). During this event, kids learn about some oddities relating to our vision and hearing, glimpse how our brains process information, consider how we can trick our senses, and find out some of the things that make each of us unique.

There is of course plenty for older children and teenagers including The Imaginarium (2-3 April) – a creative space where imaginations can fully unleash to come up with what a better future might look like. Hosted and facilitated by Cambridge Carbon Footprint and artist Hilary Cox Condron.

Other in person events that promise to get teens creatively buzzing include Punk alley (10 April), a loud, wild, and unapologetic joyride of live original punk music and high energy dance – not for the faint hearted! Irina Richards returns to provide another Manga skills workshop (7 April) this time for teens. And the Polar Museum and artist Alice White combine practical art techniques with live science experiments during The art of science (4-6 April).

There are several gaming events that offer fun and learning in equal measure, including two daily online games; the Epigenetics escape room where participants puzzle their way through a world of science, and the Virus Fighter game where players must make decisions to try and control one of four viral disease outbreaks. Or for budding economists, there is an in-person computer simulation game where players can have a go at running the British economy (30-31 March & 1 April).

For those who want to get to grips with the more serious side of learning there are several University of Cambridge online classes. The Department of Pathology returns with its hugely popular Medical Masterclasses (1-8 April, except 3rd), aimed at Year 12 students who are thinking of applying for medicine in the 2022/23 UCAS round. The NRICH team also get stuck into some of their favourite maths problems in Thinking mathematically (2 April), an interactive workshop for ages 11-14. They also investigate how a simple equation can be very unpredictable in The trouble with Quizzles (5 April), another fun, interactive workshop for ages 15-17. If that’s not enough to stir a teen’s cerebellum, there’s more… The Gates Cambridge scholars' teach-a-thon (4-8 April) is a week-long programme of short, in person and online sessions to introduce secondary school students to a variety of topics across arts and humanities, social sciences, and STEM fields.

And for all young fashionistas wanting to look their best in the Metaverse… just walk this way! On 9th April, the Future Fashion Lab @ CSVPA comes to the Cambridge Festival. During an interactive experience, visitors can design bespoke looks drawn from futuristic elements previously created by Cambridge School of Visual and Performing Arts (CSVPA) Fashion students. The students have created an interactive digital overlay via augmented reality. This digital overlay is available for everyone to download to their own devices via QR codes and social media links. ‘Personal Shoppers’ are also on hand to help guide people through the world of digital/virtual fashion. This is a fascinating opportunity to experience the digital future of fashion.

Elsewhere on 9th April, early-career physicists explain their research in three minutes during the fast-paced 3 minute-wonder; there is a workshop learning how to Build your own quantum computer; and youngsters can find out what can be learnt from a skeleton in Have a go at forensic science.

As well as events geared towards young children and teens, the Cambridge Festival also hosts an impressive line-up for all the family. The first weekend (2-3 April) is seriously busy with a huge number of events, from demos, games and quizzes to exhibitions and workshops, taking place at various drop-in venues along Downing Street and pop-up locations across the city centre. Families can build a brain, learn how some medicines were derived from poisons, play with mini-immune cell robots, get hands-on with Cambridge Science Centre's unique exhibits, and even get a tattoo! There is also an unmissable two-player, immersive theatre game called The Multitude – developed by Cambridge-based arts organisation Collusion, it features interactive projections of the players bodies.

Other events happening on the first Saturday include the Polar pop-up family day: life on the ice at the Polar Museum, and the Family first Saturday at the Fitzwilliam Museum – a day of family tours, storytelling, art activities and more, inspired by the Museum’s special exhibition David Hockney in Perspective. And at the Babbage Lecture Theatre, audiences can find out more about how their memories work with Ginny Smith in Mastering memory, and Bobby Seagull brings his infectious enthusiasm to everything from the right number of friends to have to the power of prime numbers in The Life Changing Magic of Numbers with Bobby Seagull.

If that’s not enough, there’s even more… The Museum of Classical Archaeology is hosting a series of in person events for families keen to learn all about the Greeks and their temples on the afternoon of the 6th of April. And The Institute of Astronomy also opens its doors on the 9th April for a series of hands-on activities, demonstrations, talks and displays all around their lovely, wooded site.

And finally, there is a brand-new children’s hospital being built in Cambridge. On 5th April, Cambridge Children’s Hospital and artist Harold Offeh present an artist-led exploration of the science and ideas behind the Hospital at the Cambridge Junction. During the event, families can get creative with hands-on art activities, make their own artworks to take home, and help to create a zine that will inspire everyone who is part of the hospital’s journey now and in the years to come.

Commenting on the programme of family events at the Festival, Jennifer Williams, Schools and Families Coordinator, said: “It’s vital to inspire children and young people to learn more about the world we live in, so we’re thrilled to be hosting such an eclectic range of in person and online events that hopefully do just that. And, of course, not forgetting the Festival Zine, which was such a huge success last year. The Zine is packed full of fun, practical activities everyone can do at home. A lot of work goes into all these events, which are designed to challenge, inspire, and engage. Added to that is a hefty dose of fun – which definitely helps me to learn and remember things!”