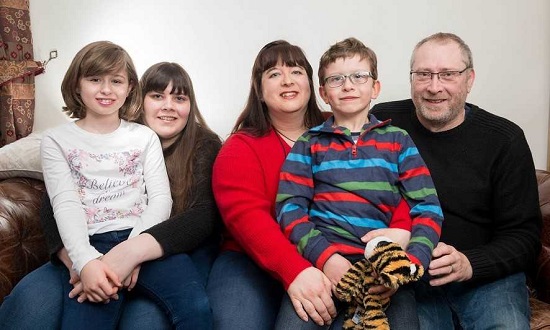 IMAGINE the challenges involved in raising a child with a rare genetic condition which affects their development? This was the situation the Monk family faced when son, Ethan, was diagnosed with Williams Syndrome. But by taking part in the IMAGINE ID study via Cambridge University, the family have received valuable assistance for the future and this International Clinical Trials Day they are helping to raise awareness of it so that more people can benefit.

Seven year old Ethan Monk was diagnosed with Williams Syndrome two years ago after abnormalities in his development were identified. These included difficulties with feeding beyond being just a ‘picky eater’, a severe squint in both eyes and delayed development. As he grew he developed some obsessional characteristics, such as fixating on certain objects, or repeatedly collecting matching items. He also lacked the social skills needed to allow him to play with children his own age.

Combined with an advanced level of speech and some subtle facial features, these characteristics led doctors to suspect Williams Syndrome which was confirmed by genetic testing. Children with Williams Syndrome (a chromosomal abnormality which is present from birth) have a high risk of being born with serious heart defects which is often how the syndrome is detected.  Because Ethan is in the minority of children born with this condition who do not have severe cardiovascular issues, his condition was undetected until he was almost 5.

Mum, Hayley Monk, trawled the internet for information about the condition and came across the IMAGINE ID (Intellectual Disability and Mental Health: Assessing the Genomic Impact on Neurodevelopment) research study which offered her a chance to find out more about how the condition was affecting Ethan personally. All Hayley had to do was complete an online questionnaire about Ethan.

The questionnaire took a few hours to complete but Hayley felt it was more than worth it when she received a detailed report on Ethan in return. This report explained Ethan’s condition in understandable terms, describing the positive aspects of his personality as well as his limitations and difficulties. Hayley said:

“The IMAGINE ID report was the first we’d received on our son that was a true description of him - his strengths as well as his weaknesses. It means that I can stop repeating myself by giving anyone new to Ethan a copy of the report. I can just say ‘this is Ethan in a nutshell’.”

The family now feel they have been armed with a tool that can help when making important decisions about Ethan’s future, such as recently when he started a new school. Hayley said:

“We were able to give a copy of the report to his new teachers and this has helped them to see the bigger picture that is our child and understand what his relatively rare syndrome actually means for him.”

May marks Williams Syndrome Awareness Month and also sees International Clinical Trials Day celebrated around the world on Sunday 20 May so the Monk family wanted to use the opportunity to encourage others to get involved. Hayley said: “If we can help spread awareness of the study then, why not? I hope other parents and carers will be encouraged to register for the study. I’m keen to do what we can to support any research that could help other families in the future.”

IMAGINE ID is an NIHR Clinical Research Network Portfolio multisite study led by teams at the University of Cambridge, University College London and Cardiff University. The study collects information about a large group of children with intellectual disability to find out how genetic changes affect children and young people’s behaviour in the hope that this will help with the care of families and children now, and in the future. Taking part involves completing an online questionnaire which means anyone in the world can potentially participate.

Professor Lucy Raymond who leads the IMAGINE ID study in Cambridge highlighted how important patient and public involvement is to research, saying: “The study aims to learn more about children with intellectual disability from parents who are the experts. Listening and documenting the knowledge parents have about their children has been so helpful. Collecting this knowledge together will provide greater insights into these genetic conditions and the sort of issues that are most important for families.”

To find out more about taking part in the IMAGINE ID study funded by the Medical Research Council, visit http://imagine-id.org/. For more information about other research happening across health and social care, visit the NIHR website at www.nihr.ac.uk.