Cambridge Intelligence takes a trip to the Palace 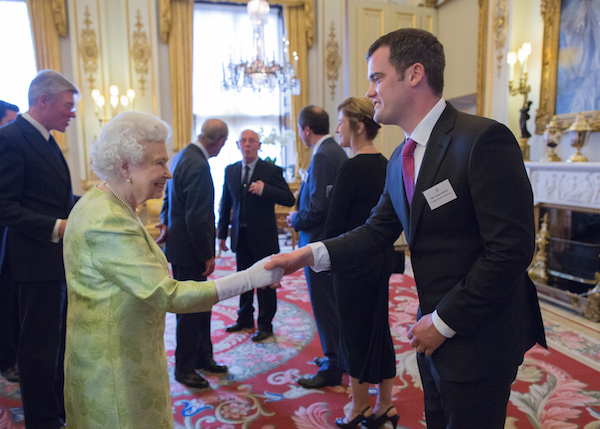 Cambridge Intelligence representatives have attended a reception for the winners of the 50th anniversary Queen’s Awards for Enterprise, hosted by Her Majesty the Queen and the Duke of Edinburgh at Buckingham Palace.

Cambridge Intelligence was one of 24 UK companies to win an award in the Technology Innovation category, having demonstrated ‘outstanding’ innovation through their data visualization toolkit, KeyLines.

Established in 1965, The Queen’s Awards are recognised in the UK as the most highly coveted achievement in the recognition of business success and entrepreneurship. Each year, winning companies are invited to a Buckingham Palace reception. For its 50th anniversary event, the 2015 reception was attended by nine members of the Royal family, including The Queen, The Duke of Edinburgh, The Duke of York and the Princess Royal.

“Visiting Buckingham Palace and meeting The Queen and Duke of Edinburgh was a fantastic experience,” Andrew said after the reception. “Her Majesty seemed particularly impressed by Cambridge Intelligence’s international growth, and congratulated us on our win. The Duke seemed on good form, taking interest in the different companies and keeping guests entertained.”

Cambridge Intelligence is one of a select group of innovative businesses to be awarded with the accolade. The Cambridge technology cluster was particularly well represented, with representatives from firms including Sepura, Cambridge Pixel, Cambrionix and Quixant present.

The company are holding their own celebrations in September at Downing College in Cambridge, where they will be officially presented with the award by the Lord Lieutenant of Cambridge on behalf of the Queen.

Cambridge Intelligence was founded in 2011 and has grown from one employee to fifteen in that time. Nearly 80 organizations around the world, including government agencies, global corporations and national police forces, use the firm’s software to make sense of complex connected data.