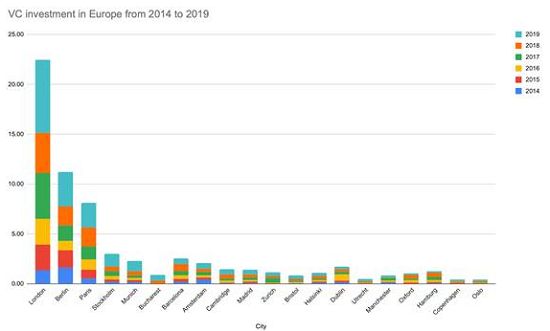 Digital Secretary Oliver Dowden said: "Cambridge is home to one of the world's top universities and has a hugely talented workforce so it's no surprise the east of England has become a thriving tech hub and secured more tech funding than many major European capitals.

"We are determined to create the conditions digital businesses in Cambridge need to succeed. Right across the country we are investing £5 billion in gigabit speed broadband, 5G, cyber security, digital skills, research and development."

Thea Goodluck, Entrepreneur Engagement Manager, East of England, Tech Nation commented: “The Tech Nation report 2020 findings show the East of England tech scene is thriving. Close to £1bn has been invested in emerging technologies in the region between 2015 and 2019, and it is exciting to see the three emerging sectors identified in the report as Agritech, Cleantech and Healthtech. Emerging technologies and sectors are visible and growing across the region as a whole, with Cambridge producing incredible AI and healthtech scaleups, Norfolk and Suffolk leading the way on agritech and cleantech, and Essex having a vibrant digital creative and AR / VR presence. Local unicorns such as Darktrace and Cambridge Medical Robotics are providing high value, highly skilled jobs in the area, and I’m delighted to see Healx and BenevolentAI join our Future Fifty 8.0 programme for late-stage tech companies.”

Poppy Gustafsson, CEO, Darktrace, commented: “It is fantastic that the UK stands as one of the top 3 countries investing in AI globally. The lifeblood of brilliant technology companies is access to capital and great talent, and Britain has both of these ingredients. Darktrace is a fantastic example of Great British AI proving itself fundamental in solving one of the society’s greatest challenges. Thousands of organizations around the world are using this technology to fight back on their behalf to protect their critical data and systems from crippling cyber-attacks.”

Baroness Joanna Shields, CEO, BenevolentAI commented: "Future Fifty was created to support high growth tech companies as they strive to scale up and become market leaders. BenevolentAI could not be more excited or proud to be part of the cohort in 2020. We are a great British business and we have an important and purposeful mission to push the boundaries of technology to understand the underlying cause of diseases and to use AI and machine learning to develop more effective medicines for patients. We are delighted to have Future Fifty by our side for the journey ahead.”

Dr Kate Hilyard, Chief Operating Officer, Healx, commented: "At Healx we are committed to transforming the lives of rare disease patients by harnessing the power of AI to discover and develop new treatments. To be accepted to the Future Fifty 8.0 programme is a great validation of Cambridge’s thriving tech ecosystem and their support of mission-driven companies that are developing tech to positively impact society."

Tech Nation, the growth platform for tech companies and leaders, has today announced the release of its annual Tech Nation Report.

The report provides a comprehensive overview of the evolution of the UK’s tech ecosystem, exploring the drivers that underpin and power economic growth within the sector.

This year, the report explores the current state of the UK tech sector, how high value scaleups and tech unicorns are fuelling investment, which UK regions are competing on the international stage, and how the UK is leading the way on cutting-edge technologies.

The Tech Nation report is proudly supported by partners Openreach and BNP Paribas Real Estate, who are pivotal in digital transformation through the provision of valuable infrastructure and in championing the UK tech sector. We would also like to thank our data partners Aon.Radford, Dealroom, Pitchbook, Crunchbase and Gsma.

2019 was an incredibly positive year for the UK tech sector. Compared to the rest of the UK economy, digital tech grew 6 times faster than any other industry (the digital tech sector contributed £149bn to the UK economy in 2018, accounting for 7.7% of UK GVA. This is nearly 6 times greater than growth across the economy as a whole, which increased by 1.4%).

Late stage scaling investment in the UK has boomed over the last year: Series C investment onwards grew by 71%, and Growth Equity (Private Equity) grew by 51%, indicating that the UK tech ecosystem is scaling and companies are ready to take on large sums to enable unicorn style growth.

In 2019, 81.2% of investment into UK tech went to scaling firms, compared to 80% in 2018. A ‘scaleup business’ is defined as a company which has seen average annualised growth of at least 20% over three years with 10 or more employees at the start of the period.

Fintech remains the UK’s largest tech investment sector with a 100% rise from 2018. 44% of Europe’s Fintech unicorns and companies valued between $250m and $800m are based in the UK.

UK Growth powered by High Value Scaleups across the country

These companies are important as they represent the pipeline of companies that are already disrupting the UK’s tech ecosystem, and show trends and patterns in the development of the UK tech sector. To date these companies have raised £6.75bn and employ 17,475 people.

Forty-five per cent of high value scaleups are based outside of the capital, including in wejo based in Chester, Bybox based in Coventry and Crisp Thinking based in Leeds.

UK companies secured a third of the £30.4bn of investment raised by tech companies during 2019 in Europe.

25% of Europe’s top 20 highest investment tech cities are in the UK - Manchester, London, Bristol, Oxford and Cambridge. Furthermore, Manchester is the fastest growing European tech city, with an increase in investment of £48m to £181m from 2018 to 2019 – representing an increase of 277%.

In 2019, for every £1 invested into New Technologies (AI, robotics, cybersecurity, blockchain, IoT, virtual reality, and augmented reality) in Europe, 35 pence was invested into UK companies.

It’s not just new technologies that are driving change in the tech ecosystem, but also values. Purpose-driven UK tech companies are coming to the fore, with investment in UK tech companies addressing UN Sustainable Development Goals (SDG) almost doubling in the last year, from £1.59bn investment to £3.06bn. UK SDG aligned companies have raised more over the last six years than those in any other European country.

In conjunction with the annual Tech Nation report, Tech Nation,  the growth platform for tech companies and leaders,  is pleased to announce the high-growth scaleups which have been selected to join the 8th edition of Future Fifty, the UK’s leading late-stage growth programme.

The programme supports companies in achieving their global ambitions, creating jobs and opportunities across the UK, and inspiring the next generation of tech entrepreneurs, founders and businesses.

New entries onto the programme this year include Atom Bank, BenevolentAI, Elvie, Soldo and Vizolution.

The programme is supported by partners CBRE, RSM, Talent Works International and Shearman & Sterling who bring their expertise and networks to Future Fifty.