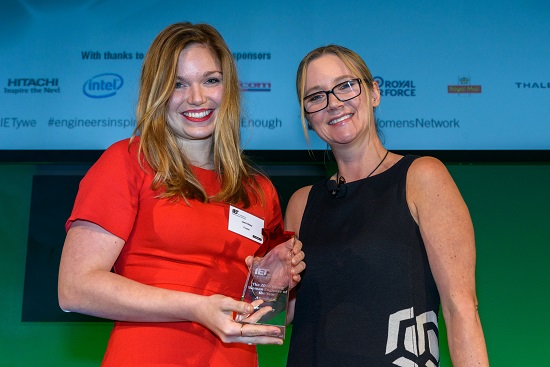 Cambridge University Lecturer in Engineering Jenni Sidey has been named the Institution of Engineering and Technology’s (IET) Young Woman Engineer of the Year.

Jenni, 28, who is a lecturer in the Department of Engineering, was presented with the prestigious award at the IET Young Woman Engineer of the Year awards ceremony in central London last night (Thursday).

On winning, Jenni said: “I am enormously proud to be recognised by such a progressive programme promoting women in engineering within the UK. The IET has worked hard to raise awareness of the lack of diversity within the engineering profession and I hope that, through my receipt of this award and involvement in gender diversity initiatives, I can strengthen the IET’s sentiment: to reach our technological potential, the UK’s engineering workforce must be inclusive and diverse.”

The IET Young Woman Engineer of the Year Awards celebrate women working in modern engineering – and aim to help change the perception that engineering is predominantly a career for men by banishing outdated engineering stereotypes of hard hats and greasy pipes.

As well as highlighting female engineering talent, the IET Young Woman Engineer of the Year Awards seek to find female role models who can help address the UK science and engineering skills crisis by promoting engineering careers to more girls and women. Women currently represent only 9 per cent of the engineering workforce in the UK (source: 2016 IET Skills Survey), the lowest percentage in Europe.

Other winners of the night included Gemma Dalziel, who won the Mary George Memorial Prize for Apprentices, and Bethan Murray, who won the Women’s Engineering Society (WES) prize.

IET President Jeremy Watson CBE, said: “I’d like to congratulate the three winners and other finalists. These talented women are a real credit to the engineering profession and will help to encourage more girls to consider a career in engineering and technology.

“Engineering is an exciting and diverse career with the opportunity to change lives – and the world – so it is crucial that we get more young girls excited about the possibilities of engineering as a career.

“Our failure to attract enough women into engineering is also contributing to the national skills shortage. We need to see women accounting for far more than only 9% of engineers of the UK.”

To help inspire the next generation of female engineers and to raise awareness of these awards, the IET’s latest social media campaign #9PercentIsNotEnough has been encouraging engineers to share a picture with their hand raised to the fact that only 9% of women make up the UK’s engineering and technology workforce – and to highlight that engineering is a realistic and inspiring career for girls.

The Institution of Engineering and Technology represents the public, professional and educational interests of over 150,000 electrical, electronic, manufacturing and systems engineers world-wide.