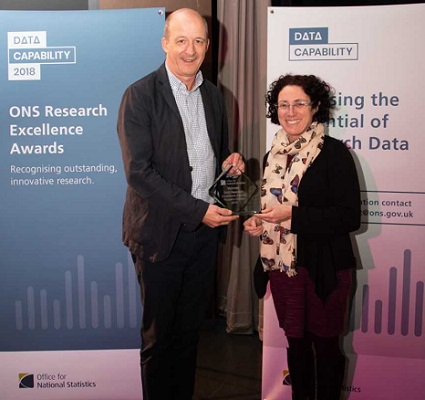 An online application that advises patients and clinicians about the best treatment combinations for breast cancer, based on personal data and previous outcomes, has won a research excellence award.

Predict, which was developed by a team of Cambridge-based clinicians and scientists led by Gordon Wishart, Visiting Professor at Anglia Ruskin University’s School of Medicine, won the People’s Choice category at the Office of National Statistics’ inaugural Research Excellence Awards.

Since its launch in 2010, Predict has helped almost 1,000,000 doctors and patients worldwide decide whether chemotherapy should be prescribed or not. The team was also commended for the public benefit and impact that the model has had, both nationally and internationally. It is the only breast cancer model currently endorsed by the American Joint Committee on Cancer.

The model works by assessing a number of input variables, such as age at diagnosis, tumour size/grade and how it was detected. It then uses statistical models to inform clinicians and patients of the treatment combination that is most likely to succeed.

Professor Wishart said: “The development of the model is a great example of collaboration between different specialities with the same goal, who all gave their time and energy without any specific grant funding.

“I was extremely fortunate to work with Professor Paul Pharoah, a statistician and Professor of Cancer Epidemiology at the University of Cambridge, who was able to turn my idea into a validated, functioning model that we called Predict.

“Together, Professor Pharoah and I have continued to develop the model with regular updates and improvements and more recently, we worked with Professor David Spiegelhalter’s team at the University of Cambridge to improve the functionality of the model.

“I was particularly pleased with the way that it was quickly adopted across UK breast units, but I had never envisaged that it would be used worldwide. There is no doubt that this has been my most significant piece of research as a breast cancer surgeon, with a national and international impact on patient care, and a great legacy to leave for the NHS and all breast cancer patients.

“I would like to thank all those who contributed, and they should all share in this recognition from the Office for National Statistics (ONS) who have recognised the massive impact that this has made.”

Sarah Henry, Director for Methods, Data, Research at the Office for National Statistics, said: “The ONS Research Excellence Awards aim to celebrate and recognise outstanding use of ONS Research Data to deliver a public benefit. The work carried out by Gordon, Paul and the team is a fantastic example of how safe and secure access to research data can be used to explore opportunities from the data revolution and deliver life-changing research.”