Cash for local projects as A14 scheme gears up 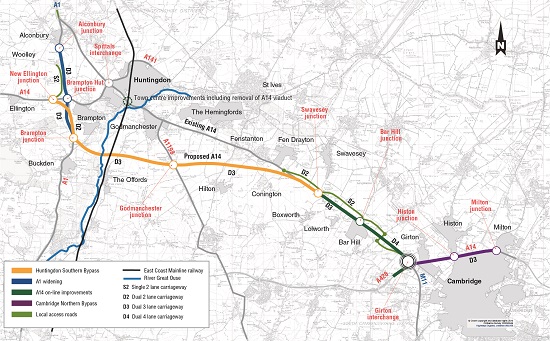 People living along the A14 in Cambridgeshire are being invited to apply for grants of up to £10,000 to help lock in the benefits of a major road upgrade that starts later this year.

The A14 Community Fund, a series of grant rounds worth up to £10,000 per project, aims to bring real, positive change and to bring local communities in Cambridgeshire closer together.

The grants will be awarded over the next two years for community projects across a wide range of areas including the environment, health and well-being, heritage, arts, skills, and culture.

The team is inviting project proposals for the first round of grants from today (Monday 18 July).

Ideas are invited from across the communities and from a range of not for profit organisations such as schools, community groups, and parishes and clubs, who are delivering charitable projects with public benefit.

Gerard Smith, legacy lead on the A14 project at Highways England said:  “The construction of the A14 Cambridge to Huntingdon improvement scheme will have a lasting impact on communities that live around it, opening up opportunities for positive initiatives to the benefit of everyone in the area. This fund will help to kick-start those opportunities and ensure that the new A14’s legacy will go way beyond that of a normal road improvement project.

“We want to work with local communities to make the most of these opportunities and ensure we leave behind a positive legacy once the project is completed.

“So I would encourage everyone to put their thinking caps on and submit their ideas today for a chance to get one of the grants!”

Project applications should take into account the transformation that the new road network will bring to their area, and seek to reflect and take advantage of the changes.

As examples, projects could:

The 21-mile A14 Cambridge to Huntingdon improvement scheme is on schedule to start construction in late 2016. The scheme will include a major new bypass of Huntingdon between Swavesey and Brampton, widening the A1 between Brampton and Alconbury, widening the existing A14 between Swavesey and Milton and improving the junctions at Bar Hill, Swavesey, Girton, Histon and Milton. There will also be improvements in Huntingdon Town Centre to include the demolition of the A14 viaduct and a new local access road.

The scheme is progressing well and on schedule. Archaeology surveys are ongoing and preparation work to build some of the compounds will start shortly.

The new bypass and widened A14 will open to traffic in 2020, although some finishing work such as the removal of the A14 viaduct in Huntingdon will continue beyond that with occasional road closures.

For the latest information about the A14 Cambridge to Huntingdon improvement scheme, visit www.highways.gov.uk/A14C2H, or search #A14C2H and follow @HighwaysEAST on Twitter.


About the A14 Cambridge to Huntingdon improvements

The government has pledged up to £1.5bn investment into the A14 scheme. The latest estimated cost-range is £1.1 billion (minimum) to £1.6 billion (maximum).

The majority of the funding will be provided by the government with a contribution of up to £100 million from local funding partners. This will be paid over a 25-year period beginning in the scheme’s year of opening.

Contributions of £1.5 million or less have also been agreed with:

Three contracts were awarded between June and September 2015 under Highways England’s Collaborative Delivery Framework (CDF) – a key part of how Highways England is delivering the significant step up in the roads investment announced by the government in June 2014, the biggest programme of investment in our roads in 40 years.

More information on the A14 Cambridge to Huntingdon improvement scheme is available on the project pages of the Highways England website: www.highways.gov.uk/a14cambridgetohuntingdon

Highways England is the wholly government-owned company responsible for modernising, maintaining and operating England’s motorways and major A roads.