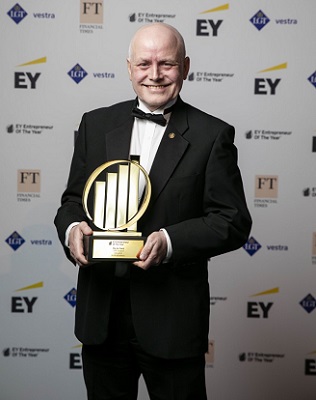 Frost took home the ‘Disruptor’ award and was commended by the judges for ‘the creation of his ‘Versius’ robot, which has the potential to transform the surgical industry’. The judges were particularly impressed that Martin developed his device to the point where CMR Surgical was able to sell it to hospitals in five and a half years – an incredibly short amount of time for the industry.

Stuart Wilkinson, Partner and East Entrepreneur Of The Year Leader at EY, said: “Congratulations to Martin for being recognised at the EY Entrepreneur Of The Year 2019 UK awards last night, where he was up against some of the UK’s most inspirational entrepreneurs. Martin truly epitomises what we see across the East of England, with more and more of our region’s successful entrepreneurs building successful businesses with a real focus on profits with purpose.

“CMR Surgical’s technology has the potential to revolutionise surgery procedures for many patients, and it’s fantastic to hear the business has now reached ‘unicorn status’. In the East we have an enviable entrepreneurial community and businesses such as CMR Surgical create jobs, generate wealth and contribute to the continued economic growth of our region.”

Based on a unique model combining business and charity, Recycling Lives uses commercial waste management solutions (which include collecting, processing and recycling all waste such as scrap metal, scrap cars, plastics, paper and cardboard), to support charity programmes.

Shirley founded a business from her kitchen table at the age of 29 in 1962, which at its height was valued at £1.2bn. Shirley’s focus on philanthropy saw her serve as the UK’s first ever national Ambassador for Philanthropy in 2009/10, and initiating and funding projects via her charity, the Shirley Foundation.

In total seven entrepreneurs from seven companies were selected by an independent judging panel chaired by Diane Foreman, CEO of Emerald Group, and past winner of the programme in New Zealand – each winning an EY Entrepreneur Of The Year UK award in the following categories:

Rising Star – Norris Koppel, CEO and Founder of Monese, based in London - A 100% mobile only banking service, offering current accounts and money transfers with a presence in 31 countries.

Imran Hakim, CEO of Hakim Group, based in Lancashire – Working principally within the optical industry, the Hakim Group offers practitioners the ability to run their own business with the freedom normally enjoyed by independents alongside the rigorous back-office support of a large company.

Sustained Excellence – Stuart Paver, Managing Director of Pavers Shoes, based in York – A family-owned footwear business with more than 100 stores across the UK and Ireland.

Also during the ceremony, Sarah Dunning and Jane Lane, co-owners of The Westmorland Family of businesses – which has operated in the motorway services industry for nearly 50 years – received the Family Business Award of Excellence.

A second generation, family-run business, Westmorland was the first family run motorway services on the UK road network. Having expanded both in scale and geography, the business now employs 1,300 people and welcomes over 4 million visitors each year at their Gloucester and Tebay Services sites.