Chippers’ marathon effort raises hundreds of pounds for EACH 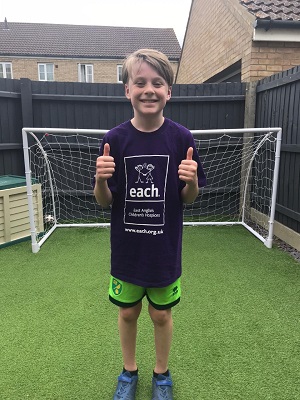 George Chipperfield, aged 11, a pupil at Ely College and Captain of Ely City Crusaders U12 football team, has run a marathon in seven days for East Anglia’s Children’s Hospices (EACH), raising £320.

George, known as Chippers, wanted to run a marathon over a two-week period, which he completed in seven days. He decided to run to keep fit during this time of inactivity in lockdown and for EACH as he has participated in many fundraisers for the charity before, whilst his team supports the good cause by sporting its logo on their shirts. The boys have raised money for EACH in the past by packing bags at Ely shops over Christmas and getting sponsored to take part in park runs.

Simon Chapman, Manager, chose EACH as the football club’s charity to support in 2018. The club has raised £1,300 for the good cause, including George’s £320 raised on his JustGiving page. Simon said: “Chippers is a model pro. He was made captain last season and has done a fantastic job continuing to fundraise for EACH.”

George’s running routine was tricky, having to balance his continued school work with windy and humid weather conditions. George would usually run with his mum, Tamson Chipperfield, and aimed to run 5km each time. There were multiple times when George ran over 5km at once, though, stretching himself to 8km at times.

Tamson said: “His dad and I are enormously proud of George. It’s been amazing to see his motivation both in raising money for EACH and when he’s out on his runs. He always wants to run a bit further each time to really push himself.”

Karen Newton, EACH Community Fundraising Manager, said: “We can’t thank George and the Ely City Crusaders U12 team enough for helping us raise money. George’s exceptional efforts to continue the team’s fundraising support during lockdown, a time when we’ve been losing significant amounts of income from the closure of our charity shops and suspended fundraising events, has been fantastic.”

To support EACH in continuing to provide vital care for children and young people with life-threatening conditions, and support for their families, you can donate here: www.justgiving.com/campaign/each-covid19.

The charity’s fundraising team have been coming up with new at-home fundraising ideas, such as Dress Up Friday, virtual quizzes, haircuts, garden marathons and various others you can find here.