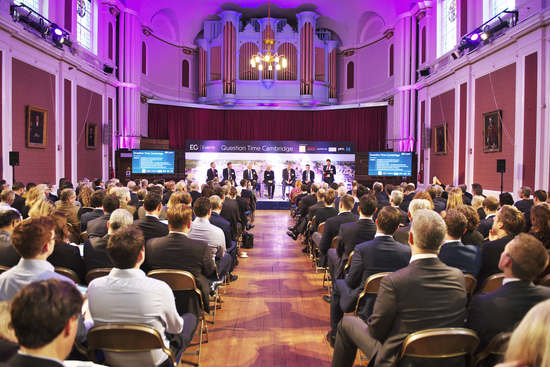 Property’s premier debating event is returning to Cambridge for a fourth year, and leading regional property developer and investor Howard Group will once again take its place among prominent industry figures as part of the panel.

This year will see Colin Brown, Director of Portfolio Development at Howard Group, speaking on the group’s behalf.

Hosted by the industry’s leading publication Estates Gazette, whose editor will also chair the event, Question Time will see some of Cambridge’s most influential leaders unite on 30 October. Together, the panel will discuss how the landscape of our city is adapting to change, and what its increased connectivity to other cities means for sustaining and enhancing success.

Held in key growth locations throughout the year, the networking panel event aims to bring high-level issues affecting potential economic development of these areas into the spotlight.

Nicholas Bewes, CEO at Howard Group, said: “The city of Cambridge is renowned not only for its past success, but also for its focus on future growth and development. It is critical that we continue to review and adapt to the changing environment around us in order to retain our attraction and competitiveness as a world class city. The burgeoning technology and bioscience sectors have an increasing need for purpose-built space in order to sustain a thriving economy, and we are deeply invested in helping to meet that demand.

“Howard Group is pleased to be lending its voice to the conversation at Question Time for the third consecutive year, alongside fellow organisations in the region that have similar aspirations to promote long term sustainable value.”

Howard Group is redefining the boundaries of the city in its creation of Unity Campus, a new business park of 260,000 sq ft in the south Cambridge cluster at Sawston, currently under construction. The development will provide office and laboratory space appropriate for the city’s booming life science sector. Phase One, known as The Works, is a reincarnation of a former 1970s industrial building onsite, providing 63,000 sq ft of high quality, modern and collaborative business space.

The debate’s panel will comprise Howard Group as the development and growth representative, together with James Palmer, the Mayor of the Cambridgeshire & Peterborough Combined Authority, PEM and Savills.

Cambridge Question Time takes place on 30 October between 8am and 11am at The Guildhall. To register for free attendance and submit a question, visit: secureforms.egi.co.uk/questiontimecambridge2018

Howard Group is an established and successful property and capital investment business based in Cambridge with interests throughout the South East.