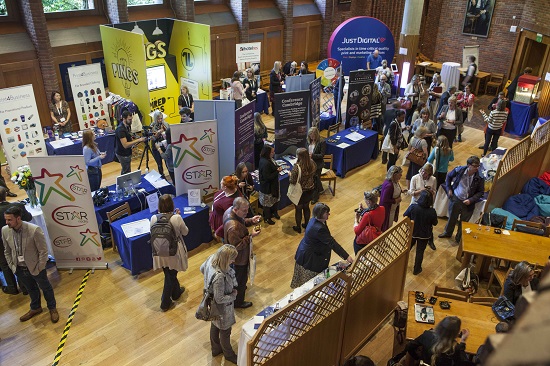 clic+, the award-winning event for event organisers, returned for a second year to inspire and engage professionals from across the conferencing and meetings sector.

Keynote speakers included Victoria Darragh, the applauded EA from Hays PLC who used her speech to highlight how event attendees could gain maximum ROI from their experience.

Her talk also included a range of personal bugbears which negatively impacted on events as well as some practical advice for improving engagement before, during and after an event. Particularly, she was keen to point out that event managers are often under-appreciated in the work they do and, as a result, pay scales fail to match the heavy workload.

In the afternoon, HR powerhouse, PutneyRed’s Linda Moir took to the stage, using examples of her time at Virgin Atlantic and London 2012 to inspire delegates, exploring different methods in which to offer exceptional customer service. From grand gestures to small touches. Importantly, it’s about getting the basics rights but adding a magic touch to differentiate from others.

The day also incorporated a series of interactive workshops, built around the main theme of the conference, and provided by market-leading companies: Media House, Speakers Corner, Live Group, Inspired and Green Moon Events.

In response to feedback from delegates at the 2014 event, a conscious effort was made to provide more networking opportunities for visitors to meet, greet and most importantly, connect.

The day concluded with a dynamic debate over the topic of ‘Degree vs Experience’ where Leeds Beckett’s Glenn Bowdin and Natasha Lowman, Inspired’s Ben Cole and Michael McGrath, founder of the Muscle Help Foundation (MHF) definitively agreed that the industry needed to look beyond this contrived conflict and see the value within both platforms. There was no doubt it was felt that formal qualifications and higher education has helped increase awareness and made the industry more attractive to young people.

A special gala dinner was also hosted by Robinson College, to welcome attendees, speakers and exhibitors to clic+ 2015 but also celebrate and support the work of the MHF. A four-course dinner was followed by a raffle and live auction where the 65 assembled guests managed to raise over £2,500 for the charity. Post event entertainment was then provided by Off Limits who offered plenty of fun and games to round of the evening.

Commenting on the event, Nick Milne, College Steward at Robinson College said: “The success of last year’s event meant that we had big shoes to fill and expectations, from both new and returning guests were high. Buoyed by the C&IT Award win for clic+ just days before the event, we threw ourselves into the occasion and delivered a convivial and educational day of content and networking. What made this event a success, was the strong links we have with our suppliers, agents and partners who all contributed their time and resources to make this event even better than last year.”

Much of the day’s action took place in Robinson College’s new Crausaz Wordsworth Building, the culmination of £5 million of investment into the academic venue.

Opened as a purpose-built conference centre in support of our academic vocation, Robinson College has been excelling as a conference venue for over 30 years by exceeding expectations. The focus is on attention to detail, outstanding food and excellent service and achieving our clients' objectives.