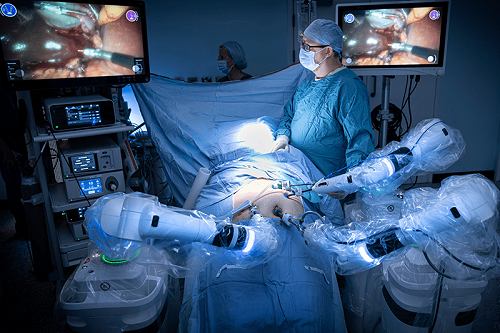 CMR Surgical (CMR) – a global surgical robotics business – today announced it has extended its NHS footprint as Gloucestershire Royal Hospital has become the latest hospital to adopt Versius. The programme has started with upper GI and will soon be a multi-specialty programme as surgeons across colorectal surgery are trained on the innovative system.

The upper GI programme has already shown significant value for the hospital as surgeons were able to successfully perform the UK’s first nissen fundoplication – a laparoscopic procedure performed for patients with gastroesophageal reflux disease – as well as a hiatus hernia repair with Versius.

Simon Higgs, Consultant General and Upper GI Surgeon at Gloucestershire Royal Hospital, said: “It was important for us to bring in Versius to the hospital so that patients having both routine surgeries like cholecystectomies as well as more complex procedures could benefit from the precision and accuracy that robotic surgery brings. Upper GI is an extremely busy department and adopting Versius signifies a new era for the specialty as many more patients will receive minimal access surgery and be treated with this high-quality technology.”

Mark Vipond, General Surgeon at Gloucestershire Royal Hospital, adds: “Versius brings multiple benefits for the Trust and we are delighted to be working with CMR Surgical on this programme. One of the key reasons Versius was so appealing to us was the small, modular design meaning that it can easily be transported to different departments so that it is being utilised as much as possible, bringing maximum value to the hospital and its patients. We’re looking forward to building on the fantastic start within upper GI and seeing additional specialties across the hospital benefit from the system.”

Versius is now established as a valuable surgical tool in a number of hospitals across Europe, India, Australia and the Middle East, where it is helping surgeons perform a wide range of procedures.

Mark Slack, Chief Medical Officer at CMR Surgical, said: “It is great to be able to introduce Versius to the Gloucestershire Royal Hospital. In designing Versius our goal was to provide a versatile and cost-effective surgical robotic system that could transform the field of minimal access surgery – allowing more patients to benefit than currently do. This multi-specialty programme with Gloucestershire Royal will do exactly that and we’re delighted to be partnering with them on this exciting new era for the hospital.”

This announcement comes at an exciting time for CMR Surgical as it has recently announced it has raised $600 million (£425 million) in a Series D financing where the company will use the funds to bring Versius to more hospitals across the UK and existing markets, as well as entering new markets.

Gloucestershire Hospitals is one of the largest hospital trusts in England serving a diverse population of more than 650,000 people. We  provide acute hospital services from two large district general hospitals, Cheltenham General Hospital and Gloucestershire Royal Hospital. Maternity Services are also provided at Stroud Maternity Hospital.
Gloucestershire Hospitals has an annual operating income of £613 million, has 960 beds, has more than 150,000 emergency attendances and 800,000 outpatient appointments each year. The Trust employs around 8,000 people, providing care for the population of Gloucestershire and beyond.
The Trust has set out a compelling vision to establish centres of excellence across specialist services on each of its hospital sites. Cheltenham General Hospital would be developed as a thriving centre of excellence for world class treatment, specialising in innovative, effective and efficient planned care. Meanwhile on the Gloucestershire Royal site the Trust wants to create a centre of excellence delivering emergency care. Both thriving hospitals would have their own strong identities and benefit from the very best expertise and facilities to reduce the risk to patients and maximise chances of survival and good recovery.