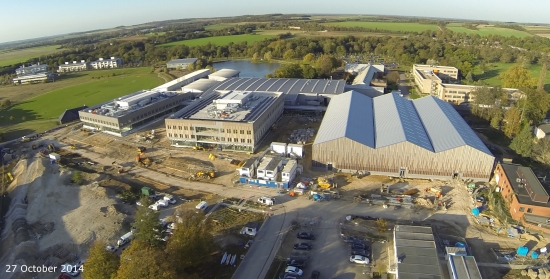 Construction work on research and technology company TWI's £43m expansion project is nearing completion, with the new engineering hall, laboratories, office space and conference facilities on track to be handed over to the company during the next few months.

Work is continuing apace on TWI’s multimillion-pound development at its Granta Park headquarters, with construction now in the final stages.

The £43 million expansion project is running to a schedule that should see the site handed over to TWI from developers SDC in early 2015.

Once the handover is completed, work will begin to transfer staff and equipment into the new facilities, where there will be office capacity for more than 650 people, with laboratory and workshop space totalling more than 6000 square metres.

The biggest beneficiaries of the new complex will be TWI’s Industrial Members, who will be able to benefit from work carried out across a greater range of engineering facilities. Part of this increased capacity will be the new engineering hall, which will have full coverage from four overhead cranes and an area of 3200 square metres: twice the size of TWI’s existing space.

A key feature of the new facilities will be the National Structural Integrity Research Centre. This hub of postgraduate education, which is expected to welcome 530 students in its first 10 years of operation, will provide a major boost to high-level non-destructive testing expertise in industry.

Alongside the office, lab and workshop space, the three buildings comprising the new development will provide conferencing facilities, a 300-seat restaurant and accommodation for TWI’s world-leading library of joining and related technologies literature.

The development also incorporates a new car park and carefully landscaped open space. Granta Park is a rural location, and TWI’s plans were meticulously drawn up to be sympathetic to the surrounding environment.

The entire project has been designed and executed in a way that avoids adversely impacting member services. Equipment currently being used for long-term tests on behalf of members will be among the last items to be transferred to the new hall, in order to avoid any disruption to work being undertaken.

TWI’s highest priority throughout the process has been the provision of a continuous, responsive service to its members, without whom the expansion would not have been possible.

Following the handover of the development in early 2015, the buildings are expected to be formally opened towards the middle of the year.