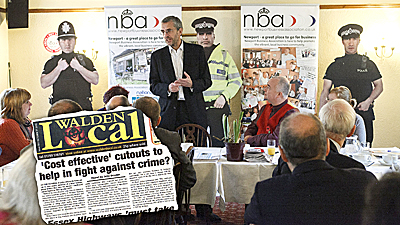 Businesses feel vulnerable to rising crime during these difficult economic times and have had to take drastic action to secure premises from criminal activities. NBA members suggested an alternative to expensive deterrents.

NBA members suggested that cardboard cutouts, as demonstrated with the three cost-effective, cardboard policemen displayed at the meeting, could deter burglars and thieves from shops and business premises.

Police Forces have loved the idea, and the cutouts, when placed in shop windows and doorways, boost public confidence, deter criminals and make the police more 'approachable'. Greater Manchester Police claim that the cardboard cutouts at superstores have reduced shoplifting by 75%.

Nick Alston, Conservative candidate for Essex Police & Crime Commissioner, noted: "I was delighted to be invited to speak to the NBA to raise awareness about the P&CC election on 15 November and to talk about my campaign. The election is a great opportunity for everyone in Essex, for the first time, to have some democratic say over the priorities of the Essex Police and to elect someone to hold the Police to account on their behalf. I am enthusiastic about the role and believe I have the relevant experience to make a success of it. It really is democracy in action; we don't see new initiatives like this very often."

"I had some great suggestions and questions from the members of the NBA. It is clearly an association that not only promotes business to business opportunities but is also keen to engage with the important issues of the day and to support the local community. Thanks and well done to the NBA."

If you'd like to order the incredibly life-like cardboard policemen, call Newport Business Association on 01799 541114, or email nba_police@c-lutions.co.uk for a special introductory offer of £60 + vat, or £160 + vat for all three. The dedicated police team could make the ultimate deterrent. Work them in shifts or station them in different areas. See web site for more details: www.newportbusinessassociation.co.uk﻿