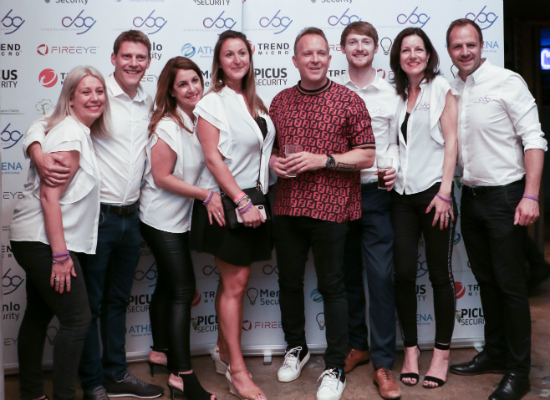 A new partnerhip has raised over £20,000 for vital hospice care across Cambridgeshire.

Jamie Murphy, the CEO and Founder of Cambridge based cybersecurity firm Cyber Business Growth (CBG) has pledged to raise funds and awareness for Arthur Rank Hospice after his wife, Barbara Murphy, was cared for on the Inpatient Unit.  Despite only just establishing the partnership, it has raised over £20,000 for vital hospice care across Cambridgeshire.

Barbara Murphy was supported and cared for on Arthur Rank Hospice’s Inpatient Unit on two occasions, at the end of 2018 and early 2019. Previously to this, she had lived with cancer for six and a half years until she was 44, despite having been told in 2012 that she only had a 20% chance of living five years.

Jamie says:  “She always fought against the odds. Barbara was very outgoing with a big personality. She really ran the family.  She was an amazing Mum and wife; really supportive. When I gave up my job as Sales Director at NTT Security and set up my own company, (which in, the end, laid the foundations we needed to care for her when I needed to) she didn’t even bat an eyelid and let me get on with it. She had unwavering, unconditional support for whatever I did. I knew what she was good at and she knew what I was good at. I was the front man and she just made things happen.”

Jamie feels that the care Barbara and his family received from the Hospice, made all the difference to their ability to cope; supporting them through what was an extremely difficult time, whilst simultaneously preparing them for the future:

“The experience was totally different from what I had anticipated, which is why I feel as passionately as I do, because it allowed us to function as a family. It was comfortable for us to be in the Hospice and, more importantly, we could see she was comfortable too. I think it speaks volumes that the girls wanted to come and see Mum here. I didn’t expect that, I thought it would be me on my own, but I think that they will be in a better place, longer term, because of that.

"That’s the key thing about Arthur Rank Hospice: it was family care, as much as it was care for Barbara. And it’s done in a way which is not intrusive. You’re being given advice, but not being told what to do. You’re being given options, in the right way, until the very end.  There were choices all the way, for Barbara and for us, and I think that’s where the feeling of comfort came from, when those options were given to us.

"For me, the Hospice team achieved a balance of being positive without giving Barbara false hope.  I think what made it really special, was that she never felt like she was locked away and couldn’t go anywhere.  She could go home - and we did go home. It’s that flexibility of maintaining the care but ultimately allowing the patient to feel a little bit of freedom when, at that time, they really haven’t got much.”

It was this experience – devastating as it was – which has spurred him on to want to support Arthur Rank Hospice:

“Before this happened, I was aware of the Charity, the Hospice and the building here, but I wasn’t familiar with what a hospice could bring to a family like mine. You don’t want to think of a hospice being associated with your family at such a young age and it is something you don’t want to talk to anyone about, but the experience has definitely changed my outlook. I want to do whatever I can to support the Hospice.”

Thanks to the support of their family, friends and colleagues, Jamie initially raised £9,500 via an online donation page.

He has now mobilised CBG and his passion for the cause is shared by the whole team, who knew Barbara well and were involved in the decision to build a new partnership with the Charity. As their first big fundraising event, CBG hosted ‘CyberSwingers’: an after-party at Fabric nightclub for delegates attending the InfoSecurity show, at Olympia in London.

The show - which is the leading industry event for Cyber Industry business security - was attended by hundreds of industry experts, with over 500 attending the party in return for a donation to the Hospice. An incredible total of over £8500 was raised through card and digital donations in lieu of an entry fee.  Many knew about the personal nature of the fundraiser through knowing Jamie personally, professionally or having viewed the video he shared on LinkedIn in the weeks leading up to the event.

The company is planning to support the Hospice’s activities however it can, whilst attempting to raise awareness of hospice care from a national perspective wherever possible, through involving clients, associates and partners.  A number of CBG colleagues took part as a team in Barbara’s memory at the Hospice’s annual Star Shine Night Walk in May, raising £2000, with other team members doing a sponsored slim-a-thon and planning a Charity Ball in February 2020.

Jamie explains what he would like to achieve through the partnership:  “I think the vision is to create a more positive view about what the benefits of having a facility like this are. It can easily be just the building you drive past every day, not really understanding how powerful it can be. But this wrap-around care was available to me and my family.

"You want to feel like you did everything for your wife making her feel comfortable, making sure her pain is being managed and controlled the best that it can be. You want you and your kids to be able to spend the time together you need in a way that feels as good as possible.  You need to be allowed to prepare both for her final days and for moving forward too, which is so important. Because you’ve got to move forwards. Having the Hospice’s care available to us was a key part of allowing me to do that.

"Obviously, you can’t cater for feeling lost, but I actually felt positive about some of the things that had happened and that was amazing. You either take it one way or another and I’m going down the other route. If I can help create awareness and funding to help make that improvement to other people too, then I’d be very proud.”

Arthur Rank Hospice’s services provide essential care to 3600 patients living with a life-limiting illness across Cambridgeshire, each year. The Charity needs to secure £8.25 million a year to fund its care, which is provided free of charge to patients and their families.