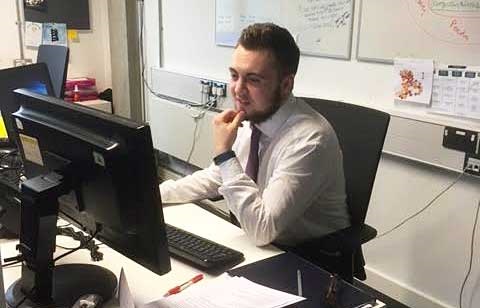 Dan Coleman joined Arcus Global as an apprentice straight from school 18 months ago. Now the company is delighted to welcome him as a permanent member of staff in his role as a Customer Service Representative.

We enjoy an informal dress code at Arcus. It’s not unusual to see people wandering around in socks and, whisper this, un-ironed shirts and T-shirts. But a couple of weeks ago there was a buzz around the office as Dan, our apprentice, arrived wearing a suit.

We want to look our best on important days and Dan had an important meeting. Dan wore a suit as he had his interview to become a permanent member of staff and he wanted to look smart and professional. He also knew that he would be teased and it would make team members laugh.

Dan is 19, lives at home and loves football. Like lots of us, Dan made an early career mistake. He realised that the course he was studying at school - fitness for football - was not for him. Dan learnt about apprenticeships while at school and liked what he heard. Being interested in computers, Dan decided to try and secure an apprentice in IT.

Dan was put forward for two interviews. He put on his suit, went to the interviews and was offered both apprenticeships. Luckily for us he chose Arcus. Peter Male, Solutions Architect, remembers interviewing Dan and was impressed with Dan’s honest and open approach at the interview. Company culture at Arcus is fundamental to our success and Dan had that certain something that made him stand out.

Dan left school in Spring 2015 and started his 18 month apprenticeship with us a week later. He arrived at work in his suit on his first day, looked around at his new colleagues and didn’t put it on again until his interview a year and half later. Dan studied at Cambridge Regional College, combining his on- the-job learning at Arcus along with technical training at College. Dan began working on internal infrastructure with us and soon found himself busy and with his own workload which gradually increased as his confidence and knowledge grew. Now Dan is a Customer Service Representative and is busy helping all our IT systems run smoothly.

Dan is very positive about his experience as an apprentice and could see no downside to being an apprentice other than his travel time. Dan says he enjoyed being in a more adult environment and preferred work to school. ‘I learnt far more at work than I did at college. I’ve jumped ahead of my friends who stayed on at school and I get paid.’

Dan loves working at Arcus and is delighted to have had his first ‘proper’ pay cheque as a permanent employee. Dan loves the friendly atmosphere at Arcus and values the fact that his career is just starting and is looking forward to future opportunities in his role as a Customer Service Representative will bring.