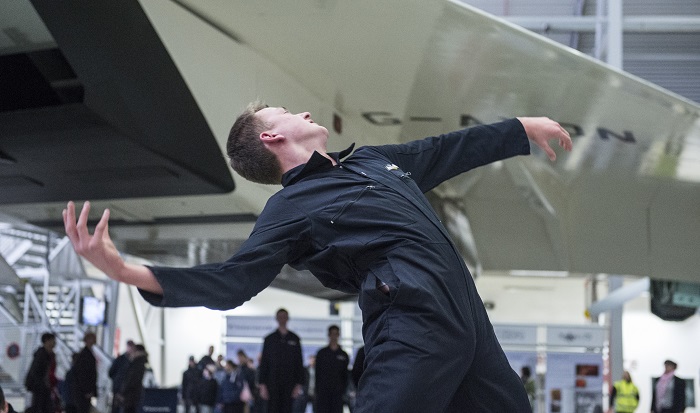 New Adventures dance artists have been working with young male dancers to create this brand new piece of dance, inspired by the role of young RAF airmen at Duxford during the Battle of Britain.  The performance represented young airmen newly arrived at RAF Duxford in the Second World War and showed them in physical training, being fitted for their uniforms, servicing aircraft and scrambling to fight the enemy.

It was performed by Legacy, an all-male dance company for young men aged 10-21, with participants from all over East Anglia. Legacy was created following the UK tour of Matthew Bourne’s production of Lord of the Flies.

Families can get hands-on with history, hear fascinating talks and explore the cramped interior crews worked in when completing their missions. These duties included providing humanitarian aid to the occupied Netherlands dropping 7,000 tonnes of food supplies into the country at the end of the Second World War.

Discover how the Lancaster bomber played a major role in the Second World War in the 75th anniversary year of the Dambusters Raid.

Also commemorating the 75th anniversary of the Dambusters Raid, the DAMBUSTERS Flip Book will be available from the IWM Duxford shop from Thursday 15 February.