EACH benefits from popular bike and gala festival 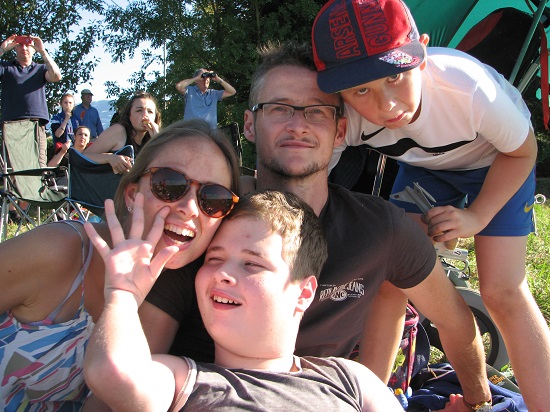 Cyclists of all ages and abilities are invited to enjoy the countryside of western Cambridgeshire whilst raising money for East Anglia’s Children’s Hospices (EACH).

The cycling will be followed by a gala festival featuring an array of traditional stalls, games, live music, barbecue, beer tent and more.

Among the organisers are Tamsin and Paul Olney, whose 13-year-old son Oscar benefits from short breaks at EACH’s Milton hospice.

Oscar (pictured with his family) was born with hydrocephalus, causing him significant brain damage. As a result he is non-verbal, severely sight impaired and a wheelchair user, requiring constant monitoring and round the clock care.

He was first referred to EACH in 2014, initially for hydrotherapy. Oscar now benefits from respite care and his parents, along with his brother Zack, nine, also sometimes get to stay at the hospice. Oscar has also been able to access music therapy and play therapy.

Tamsin said: “We’ve only been with EACH for three years but already we don’t know where we’d be without them. Not only do we benefit from so many services that they offer, they’re always one step ahead of us in terms of what they can do to support us. They’re always looking to see what they can do to help, especially when times are particularly tough.”

It is for those reasons that Tamsin and Paul are helping organise Bromswold Bike Fest.

Tamsin continued: “The great thing is that it’s for all abilities and ages, with seven cycle routes to choose from, and even if cycling’s not your thing you can come and enjoy the gala festival.

“We’re so very proud that such a small village can pull off such a successful charity event. It couldn’t be done without the help and support of the community.”

Last year more than 200 cyclists and supporters raised over £7,700 despite bad weather. This year it is hoped that total, to be split between EACH and Macmillan Cancer Support projects in Cambridgeshire, will be increased.

Start times are staggered between 9.30am and 1.30pm depending on route length. Entrance ranges in price from a suggested donation of £5 to £15, while the two-mile ride for children is free. The gala festival gets under way at 1pm.

To enter, download a form at www.bromswoldbikefest.org. Organisers ideally need to know who plans to cycle by Thursday, 8 June but participants can turn up on the day.