EACH donation from Ed Sheeran showcased on global platform 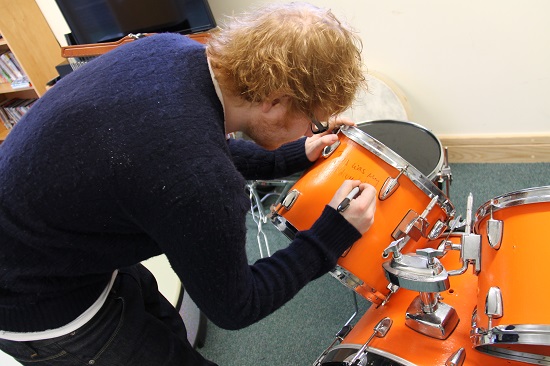 A chance to bid on a piece of musical memorabilia that helped shape Ed Sheeran is being offered by a global charity auction in partnership with East Anglia’s Children’s Hospices (EACH).

The Suffolk-based singer has donated the drum kit he used as a teenager to the children’s hospice where he has been an ambassador since 2014. The kit already has an autograph from Ed and he has also agreed to pen a further personal message to the highest bidder at the end of auction.

Now the profile of the generous donation will go global after the team behind the Ultimate Charity Auction happily agreed to include it as a lot in their fundraising auction.

The announcement of the auction lot comes just days after it was confirmed the singer will be giving an exclusive live performance at the Natural History Museum, for a very exciting evening in aid of the charity.

The donation, which is 100% in support of the EACH nook appeal, will be a star turn during the auction which started on Saturday (22nd October) and runs until Sunday 6th November.

Gina Long MBE, who has raised more than £870,000 for national and local charities since launching the online auction in 2012, said she was delighted to be able to show her support of EACH.

Gina said: “I am a long-term supporter of EACH and was honoured to be a former chair of the charity’s special events committee.

“Now in its fifth year, the Ultimate Charity Auction was always designed to support as many relevant and worthwhile charities as possible.

“We have four main beneficiaries from this year’s auction but money raised from Ed’s generous and wonderful donation will go solely to support the fantastic work of EACH.”

The drum kit, which was spray-painted by a teenage Ed himself, was signed by the international superstar during his visit to the charity’s Treehouse hospice in Ipswich with the inscription ‘This is my old drum kit, love Ed Sheeran’.

The kit was originally given to the singer by his mum and he played the instrument through his formative teenage years, developing his life-long love of music - all the drums have been well used, showing Ed’s passion for music. The drum kit is painted bright orange with a green snare with a paw print pattern. Ed has agreed to pen a further personal message to the highest bidder in the forthcoming auction to make the drum kit extra special for the lucky winner.

The sale of the donated drum kit will raise valuable funds for the EACH nook appeal – as will funds from the exclusive live performance Ed is due to give at the EACH Gala Dinner being held at the Natural History Museum in November.

The nook appeal is the charity’s £10 million campaign to transform children’s palliative care across Norfolk, including building a new hospice called the nook. EACH has outgrown its current hospice in Quidenham, due to the changing and more complex needs of the children and young people they care for and needs to move to a purpose-built site. The nook will be built on a five-acre woodland site south of Norwich and will offer services which are either currently unavailable or extremely limited at Quidenham hospice.

Graham Butland, EACH Chief Executive, said: “We are thrilled this generous gift from our Ambassador Ed Sheeran will be a top lot in this high profile auction. Gina Long is a long-term supporter of EACH and her hard-work and dedication to our cause is truly fantastic.

“Ed has been an EACH Ambassador for more than two years and has shown us tremendous support in that time, donating clothes for online auctions and paying a visit to our Treehouse hospice in Ipswich. Of course, most recently the announcement of his live performance at our Gala Dinner next month. Not only will this auction lot raise valuable funds for our nook appeal, but it will also greatly raise the profile of EACH and the vital care and support we provide to life-threatened children, young people and their families. We are so very grateful for Ed’s continued support of EACH.

“The money raised through the auction will go towards taking us one step closer to reaching our vision of providing a 21st century building for 21st century care for families in Norfolk.”

The star-studded donation will sit pride of place alongside a host of glittering auction items donated by the world of sport, celebrity and lifestyle when the Ultimate Charity Auction returns later this month.

This year’s fundraising auction will support Sarcoma UK as well as In the Game – the League Managers Association Charity, My WiSH Charity which supports West Suffolk Hospital and the GeeWizz charitable foundation.

More information on the auction can be found at www.ultimatecharityauction.com or by following the auction on Twitter @UCOnlineAuction.