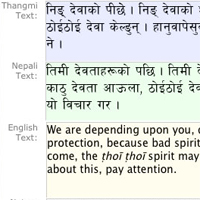 An open database of endangered languages has been launched by researchers in the hope of creating a free, online portal that will give people access to the world’s disappearing spoken traditions.

The website has been developed by researchers at the World Oral Literature Project, based at the University of Cambridge.

It includes records for 3,524 world languages, from those deemed "vulnerable", to those that, like Latin, remain well understood but are effectively moribund or extinct.

Researchers hope that the pilot database will enable them to "crowd-source" information from all over the world about both the languages themselves and the stories, songs, myths, folklore and other traditions that they convey.

Users can search by the number of speakers, level of endangerment, region or country. In the United Kingdom, the site lists 21 disappearing languages, ranging from the relatively well known, like Scots and Welsh, to obscure forms such as Old Kentish Sign Language.

Where possible, the research team has also included links to online resources and recordings so that users can find out more. Their hope is that by making an early version of the database open to all, more people will come forward with information and references to recordings that they have missed.

Dr Mark Turin, Director of the World Oral Literature Project, said: "We want this database to be a dynamic and open resource, taking advantage of online technology to create a collaborative record that people will want to contribute to."

At present, the world has more than 6,500 living languages, of which up to half will cease to exist as spoken vernaculars by the end of the century. In most cases, their disappearance is a by-product of globalisation, or rapid social and economic change. The World Oral Literature Project aims to document and make accessible these spoken traditions before they are lost without record.

Three existing datasets are raising awareness about the number of languages under threat: the online Ethnologue, the UNESCO Atlas of the World's Languages in Danger and innovative work by conservation biologist Professor William Sutherland in the Department of Zoology at the University of Cambridge. Each, however, evaluates the risk and the problem differently, with varying results.

"While some severely endangered languages have been well documented, others, which may appear to be less at risk, have few, if any, records," Dr Turin said. "Here in Cambridge we are interested not only in language endangerment levels but also in what might be called a 'documentation index'. To this end, we are locating references to and recordings of oral literatures in collections around the world."

"At the moment if you're a researcher, a member of an endangered speech community or just an interested member of the public, there is no way to pull all these useful but disparate resources together in one place. We wanted to create a resource that does just that, and also build something that can be developed and expanded further to encourage other people to submit additional information. At present, the database allows us to pose comparative research questions about which languages are closest to extinction and where the records are."

Of the 3,524 languages listed, about 150 are in an extremely critical condition. In many of these cases, the number of known living speakers has fallen to single figures, or even just one.

The entries specific to the United Kingdom include Manx, Cornish and Old Kentish Sign Language - a precursor to the generic British version which Samuel Pepys, among others, referred to in his famous diary.

Another disappearing oral tradition in the United Kingdom is Polari, a form of slang once used by the likes of actors and circus or fairground communities, and which was then adopted by gay subcultures as a type of code language.

Elsewhere in Europe, the endangered languages list includes a version of Low Saxon spoken in the north-eastern Netherlands; Mocheno (a Germanic language used in north Italy); and Istriot, which is spoken on the Croat coast and has about 1,000 speakers left.

The database also covers extinct languages about which enough is known through existing records to render them visible. In some cases this may be because the speech form died out very recently, as is the case with Laghu, which was spoken on Santa Isabel in the Solomon Islands and disappeared in 1984. In other scenarios, the language ceased to be spoken long ago but is still well known or used in a specialised setting, as with both Latin and Ancient Greek.

The database is being launched to coincide with a workshop at the Centre for Research in the Arts, Social Sciences and Humanities (CRASSH) at the University of Cambridge on December 10 and 11, which will bring together researchers to discuss some of the key issues surrounding the dissemination of oral literature through traditional and online media.

More information about both the database and the World Oral Literature project can be found at: http://oralliterature.org/ The pilot database was made possible by a Small Research Grant from the British Academy with additional funding from the Chadwyck-Healey Charitable Trust.