A decade-long project to capture the portraits of 100 pioneering women of the 21st century has culminated in a striking new exhibition which can be seen at Palace House in Newmarket from 14 February (until 10 June). 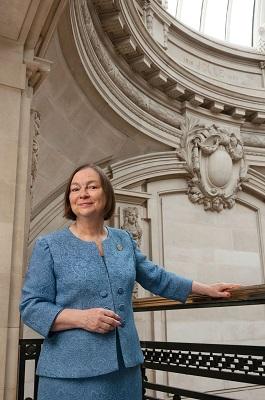 Appropriately titled 100 First Women Portraits the exhibition was created in 2018 to mark the centenary commemoration of the Representation of the People Act, which granted the vote to women over 30-years old and paved the way for universal suffrage.

Anita Corbin first sprang to prominence in the early Eighties with her series of informal portraits of young women, Visible Girls and went on to become a highly-regarded reportage and portrait photographer.

Corbin then began to train her lens on ‘ordinary women achieving extraordinary things’ in a variety of disciplines, including sport, media, the military, faith, business, arts, music and politics.

The resultant 100 First Women Portraits is a visually arresting and immersive exhibition, featuring portraits from celebrities and famous personalities from across the decades.

From women as diverse as The Rt Hon. the Baroness Boothroyd OM, First Woman Speaker of the House of Commons and TV quiz show host, Victoria Coren-Mitchell, to newscaster and Morecambe and Wise star-turn, Angela Rippon to writer and comedienne, Jenny Éclair, Corbin has documented a broad swathe of Britain’s foremost women.

“From ages 18 to 102-years old and in fields of expertise covering everything from beatboxing to bomb detection, I wanted to create an impressive visual story of female potential, fantastic role models that will hopefully inspire other women and men, of all generations, now and in the future/” Anita explains.

She adds: “In a long history dominated by notable males, 100 First Women Portraits asks ‘What is it about women that can inspire you?’”

First Women’s patron, Baroness Betty Boothroyd – and first female Speaker of the House of Commons – is a great supporter of the First Women project, which aims to develop the awareness of the possibilities available to women, not just in business – but to inspire and encourage the viewer to define what their own path is and what personal achievement really means.

Anita reveals her inspiration for 100 First Women Portraits: “With more images being made now than ever before, I wanted to provide an alternative to the mainstream, to create images of women that demand people look beyond the exterior and find the inner truth. I wanted to celebrate the impact women have had on society over the last 100 years.  I hope that the First Women series will inspire future generations and help them see that it is possible to break down barriers whether they are gender, social, economic, cultural or political. I have created these powerful images to offer emotional support to women who seek to be the best they can be; those women who want to aim high will look at my pictures and see they are not alone.”

Chris Garibaldi, Director of Palace House, The National Heritage Centre for Horseracing and Sporting Art says ““As part of our raison d’être here at Palace House, we like to give the public fresh glimpses into our sporting and cultural past, present and indeed, future. From a personal point of view Baroness Boothroyd is one of my own particular heroes so I couldn’t be prouder that we are hosting such an inspirational exhibition as 100 First Women Portraits here at Newmarket.”

Anita Corbin has an eclectic and fascinating background as a leading photographer, working for over 30 years with the likes of The Sunday Times, The Observer and ELLE as well as charities, health trusts and the British Council. A number of her works can be found in the National Portrait Gallery collection. A graduate of the Royal College of Art, Corbin began her passion in the early 80s photographing women defying the mainstream and flying the flag of individuality in a predominantly male dominated world, something she lived in her own career. These double portraits of girls in subcultures were recently shared as a ‘then’ and ‘now’ in her internationally acclaimed touring exhibition Visible Girls: Revisited. Throughout her long career, Corbin has focused on the image of women. She still works as a commercial photographer, specialising in portraiture and lives in the West Country with her partner, photographer John O’Grady.

Palace House, The National Heritage Centre for Horseracing and Sporting Art brings together the National Horseracing Museum and the British Sporting Art Trust, which opened in Newmarket, Suffolk in November 2016 with much greater display and exhibition spaces than its previous site. It aims to display the finest examples of British sporting art, defined in a broad sense together with the social history and science of British horseracing in a new venue. More at www.palacehousenewmarket.co.uk and follow up on Twitter @palacehouse_nkt