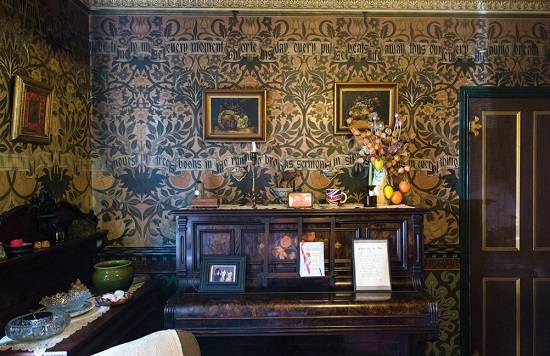 With the help of the recently rebranded Indie Cambridge - the community of ‘real’ Cambridge - Cambridge Network continues its weekly exploration of the best independent shops, cafés, restaurants, people, businesses, venues and events in Cambridge and the surrounding area. This week: David Parr House.

Blink and you’ll miss the David Parr House. Located at 186, Gwydir Street, the humble terraced house, opposite Hot Numbers Coffee, looks like any other in the row. But step inside and you find a truly remarkable hidden treasure – a time capsule of the Arts & Crafts era and a portal into the life of a working man in Victorian times.

Over a period of 40 years, David Parr – a working-class artisan employed by renowned Cambridge decorative arts company F R Leach & Sons – painted the walls of his abode in the style of the grand interiors he worked on every day. The result is breathtaking: walls and ceilings embellished with complex patterns of interwoven foliage and flowers; ornamental scroll motifs inscribed with quotes in bold Gothic script; magnificent carved wood cornicing and grandiose lincrustra detailing.

His work with Frederick Leach on the country’s finest houses and churches, from St James’s Palace to Jesus College Chapel, Cambridge, brought David Parr into contact with eminent architects and designers, including William Morris, George Bodley and Charles Kempe, and their influence is everywhere in the tiny terraced house.

In fact, when Tamsin Wimhurst first visited the house, back in 2009, then the home of David Parr’s granddaughter, Elsie Palmer, she initially thought the walls were covered in William Morris wallpaper. But Elsie, who had moved there in 1927 after David Parr’s death – and stayed for 85 years – told Tamsin about her grandfather’s extraordinary handpainted legacy.

Tamsin was determined this masterpiece should be saved, and so began an epic conservation project, which has seen independent businesses, local artisans, dedicated volunteers, plus the Leach and Palmer families, pitch in. As a supporter of the Arts & Crafts movement – itself a reaction to big business – David Parr would surely have approved of this.

Tamsin and husband Mike bought the house in 2013 and gifted it to the charity they set up. Finding rain pouring through the roof, they soon realised the enormity of the project. In 2017, with the support of the National Lottery Heritage Fund, restoration work began. Five thousand items were catalogued and cleaned, and more than 50 volunteers offered their expertise, from local architects, curators and wall paint conservators, to floor specialists, builders and photographers. Several have stayed on to be guides for house tours, which begin May 16.

Due to the fragility of the house, visitor numbers are capped at 2000 per year, and the charity hopes to raise a million pound endowment to pay for a curator. There’s still much hidden beneath the walls of 186, Gwydir Street – patterns that were painted over, but require true specialists to uncover – so the David Parr House has many more secrets to reveal in years to come. How intriguing.

Discover unique boutiques and boutique hotels mingled with communities of artists and craftspeople. Sample an award-winning restaurant or thriving little café tucked away in a back street – all easy to locate via the comprehensive Indie Cambridge directory.  It features hundreds of local traders, artists, makers, producers, venues and events – all of which play a part in the real life of the city and local area. Run by long-term residents with a true passion for all things indie, the site is packed with valuable insider knowledge of the local scene. And whoever you are - resident or visitor; whatever you search for, read about and choose to visit, you can be sure it’s independent!

Look out for the latest edition of Independent Cambridge's magazine, The Indie, out now - or read it online here.