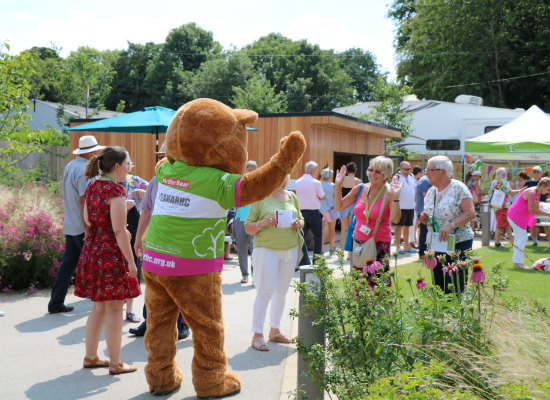 Over 400 visitors enjoyed all the fun of a traditional summer fete in Arthur Rank Hospice’s grounds and gardens on Saturday 7 July. The Charity has now revealed that £4275 was raised!

The Hospice’s Bistro hosted all kinds of stalls from a children’s toy store to bric-a-brac, jewellery to homemade cards, puzzles to plants. There was an amazing array of prizes on offer in the Raffle and outside, the Hospice gardens’ became a kid-friendly kingdom of face-painting and traditional village fete games – like Splat the Rat, a Coconut Shy, Hook-a-Duck, Spin the Wheel, Play Your Cards Right - many of which (along with equipment and prizes) were very kindly provided by Bidwells (Trumpington).

Hot dogs and beef burgers were served up by the Hospice’s catering team, thanks to a generous donation of BBQ-meats from Barker Bros Butchers (Great Shelford); and ice creams were available to purchase from Toni’s Ices who kindly donated a percentage of their profits from the day.

Whilst the Team Arthur Challengers party took place in the Education & Conference Centre, kids enjoyed soft play in our physiotherapy gym; there was a flower arranging workshops by volunteer Patsy in the activity hub; an appearance from Arthur Bear, who came out to hug and high-five his fans, despite temperatures hitting 30 degrees C.

The fun and games were interspersed with beautiful music from Jazz Wave Jazz Band, Big Ron Tee and Arthur Rank Hospice’s own choirs -Sister Shed & Sky Larks – floating out from the Day Therapy lounge, and there was an opportunity to take a quiet moment in the Sanctuary and write down a memory about somebody special, before hanging it from the branches of a special tree donated to the Hospice by Cambridge Plants.

The Charity was delighted by the turn out, and - as Donna Talbot, Director of Fundraising and Marketing at Arthur Rank Hospice explains - the day illustrated just how much the Hospice is becoming a hub of the local community:

“We were thrilled that 436 people came along to our first ever Fete at the Hospice. There was a fabulous atmosphere around our building and gardens, and such a lovely mix of people: patients and families, trustees, supporters, volunteers, staff and members of the local community who may not have visited us before, all enjoying the sunshine and summer fun together. We’d like to say a huge thank you to everyone who attended, supported and volunteered, to help make the day go so superbly.”

As well as members of the local community showing their support by attending the Fete on the day (despite a certain football match), local community groups and organisations shared and helped publicise it, with Martin & Co  putting advertisement boards outside supporters’ houses. Members of the Charity’s staff and volunteer team, as well as its supporters offered to host one board each around the local area; with each of the 75 boards translating into a £10 to the Charity from Martin & Co, raising £750 towards the total funds raised.

A huge thank you is extended to all those already mentioned, as well as to the volunteers and staff members who supported (and worked around) the activities on the day; and the patients, family members and visitors who attended: such wholehearted support made for a vibrant and fun first Summer Fete at the Hospice.

Arthur Rank Hospice Charity needs to secure £8.1 million every year to deliver services free of charge to patients and their loved ones. About half of this currently comes from statutory sources, with further funds raised thanks to the wider local community, whose support is critical in helping make every moment count.