Flybe touch down to expand the UK gateway at Stansted 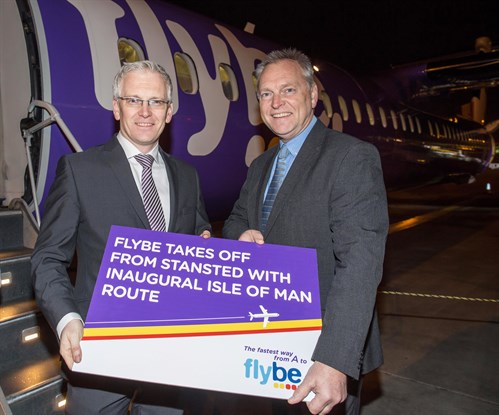 Flybe, Europe’s largest regional airline, touched down at Stansted Airport for the first time this week to expand Stansted’s UK connections and launch the first of three new services direct to the Isle of Man, Newcastle and Newquay.

First off the starting blocks was the new service to the Isle of Man, which will operate three times a day by the end of March. Next for take-off will be Newcastle on 29th March to provide passengers with twice daily direct connections during the week and daily at weekends to the North East. Newquay will be the third new route to join Flybe’s network at Stansted and has proven so popular its already extended to a daily service from 16th May having initially been announced as a ‘seasonal part week summer service’.

Welcoming Flybe’s inaugural service from the Isle of Man, Stansted Airport’s Managing Director, Andrew Harrison said: “It’s always exciting to welcome a new airline and launch new routes and today we’re not just welcoming the expansion of our UK regional connections but the arrival of Flybe onto the departure boards for the first time in Stansted’s history. This is really great news and an important part of our ambition to attract new airlines to Stansted and provide greater choice for passengers.”

Flybe Chief Commercial Officer, Paul Simmons, said: "This is an important day for Flybe as we mark the start of our new operations out of London Stansted with this new multiple frequency year-round route to and from the Isle of Man. We’re committed to bolstering regional connectivity across the UK. Our franchise partner, Loganair, has already established a route to Dundee from London Stansted and so, with the help and support of the airport team, we are naturally delighted to be extending further the Flybe presence to and from this key London airport.”

“We look forward to welcoming on board all our new Isle of Man passengers and especially to those who are seeking easy access to and from Cambridgeshire, Suffolk, Hertfordshire, Essex and London, be it for business or leisure."

Flybe services between London Stansted and the Isle of Man are available to book online at www.flybe.com with one-way fares as low as £29.99.