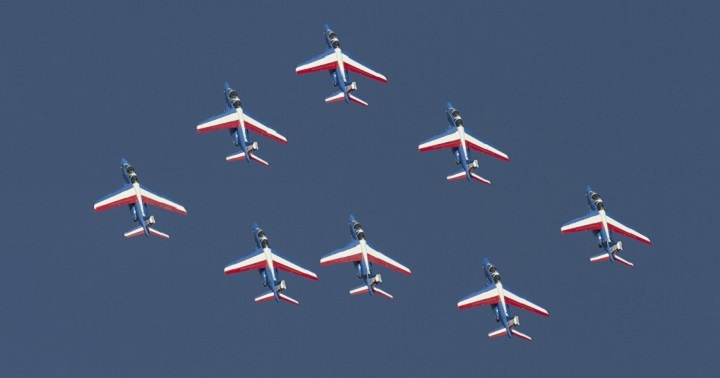 The Duxford Air Festival (Saturday 26 and Sunday 27 May) is a feast of action-packed entertainment for all the family, with children under 16 going free.*

In addition to the exhilarating flying displays, there will be activities for all the family at the Duxford Air Festival, including the Family Flight Challenge, featuring Richard Meredith-Hardy, the first person to fly over Mount Everest in a microlight.

Taking place across the museum, the Family Flight Challenge will feature a host of captivating activities. In the Trailblazers Zone, in the Battle of Britain exhibition, Channel 4’s Arthur Williams will be in conversation with some of the finest adventurers and trailblazers from the world of aviation. Arthur has presented and written a number of leading documentaries on military history, travel and aviation, as well as Paralympic Sport. Arthur will be in conversation with Brian Jones who, along with Bertrand Piccard, co-piloted the first successful uninterrupted circumnavigation of the world onboard the balloon Breitling Orbiter 3; Ademilola Odujinrin, the first British African pilot in history to fly solo around the world and Richard Meredith-Hardy, a British extreme microlight pilot, who was twice World Microlight Champion and is also the first person to fly over Mount Everest in a microlight.

In the American Air Museum, visitors can try their hand at building a large-scale model of a Boeing B-29 Superfortress.  Visitors can also get up close to a Chipmunk aircraft and a Pitts aircraft, experience an interactive 1950s RAF mobile control tower and meet members of the Dawn Patrol living history group, who will be portraying aviators of the Great War period.

Entry to IWM Duxford is included in the ticket price for all air shows. Visitors can get up close to the aircraft that have revolutionised flight, including the futuristic Blackbird spyplane, which performed top secret operations for almost 30 years and the B-52 Stratofortress, which stretches the length of the American Air Museum.  Iconic aircraft, including the Spitfire, Concorde and the contemporary Tornado, are on display across the museum.

Tickets for all air shows must be booked in advance; no on-the-day tickets are available. A fantastic Early Bird offer is available until Sunday 13 May.

*Kids go free when an adult purchases a ticket for the Duxford Air Festival.