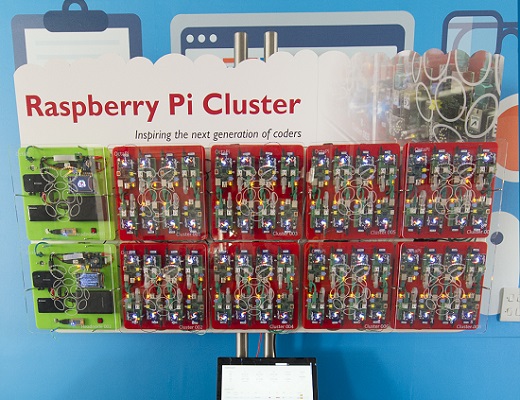 GCHQ has today unveiled the world’s biggest Raspberry Pi ‘Bramble’ at the Big Bang Fair 2015 at the NEC Birmingham as it attempts to inspire the next generation of young talent to think about a future in science and technology.

Consisting of 66 individual Raspberry Pi computers networked together, the current title of ‘world’s biggest Bramble’ for GCHQ’s cluster of these small devices has been verified by the Raspberry Pi Foundation.

Built by GCHQ’s own in-house computer experts for an internal competition, the purpose of the Bramble is not only to help teach students how to programme a computer in an efficient and effective way at scale, but to show that science and technology can be fun.

The GCHQ Bramble is made up of eight clusters of eight Raspberry Pis, which GCHQ has termed an ‘OctaPi’, plus two extra machines. It is essentially a cloud computer in miniature.

Networking dozens of computers in this way demonstrates the ‘scale out’ principle of how the speed of algorithms increases when many computers are used. This principle will be an important part of computing in the future – the current generation of technology has reached its physical limits and one way to do more is to use multiple processors in parallel - and the Bramble will therefore help young programmers to learn relevant coding skills.

The OctaPi Bramble can be used to run many of the real world applications and software utilised on large-scale public and private cloud platforms available to the IT industry today. This provides users with a great opportunity to use the platform to develop their skills on both Open Source and bespoke software & hardware on a low-cost accessible system.

GCHQ hopes its Bramble will inspire others to be creative with Raspberry Pis. The ultimate aim is to use the OctaPi concept in schools to help improve programming habits amongst young people.

A GCHQ spokesperson said: “We are really excited about the launch of what we believe to be the world’s biggest Bramble, which provides a fun and interesting way of understanding the benefits of networking computers at scale and developing relevant skills in coding.  We fully expect others to beat our record-breaking cluster before too long, but hope that it will inspire young people to get involved in the study of science-based subjects and take advantage of the exciting career opportunities such qualifications can offer.”

Eben Upton, CEO of Raspberry Pi, said: "Clusters of Raspberry Pis provide students with an inexpensive way to gain experience of the challenges involved in software development for white-box supercomputers. With this in mind, we're delighted to see our friends at GCHQ taking their OctaPi machine to this year's Big Bang Fair."

Government Communications Headquarters (GCHQ) is one of the three UK Intelligence and Security Agencies, along with MI5 and the Secret Intelligence Service (MI6). GCHQ works to protect the UK and its citizens from a range of threats to national security, including from terrorism, serious and organised crime and cyber-attack. It also works to protect UK forces wherever they are deployed and, through its Information Security arm CESG, provides policy and assistance on the security of Government communications and electronic data. Further information about GCHQ can be found on our website: www.gchq.gov.uk

The Raspberry Pi is a credit-card sized computer that plugs into TVs or keyboards. It can be used in electronics projects, and for many of the things that a desktop PC does, like spreadsheets, word-processing and games. It also plays high-definition video. To find out more, visit www.raspberrypi.org


About the Big Bang

The Big Bang UK Young Scientists and Engineering Fair takes place at the NEC, Birmingham, from 11-14 March 2015. This free event is the largest celebration of science, technology, engineering and maths for young people in the UK.