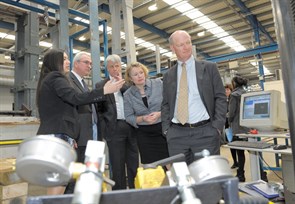 A visit to TWI on Friday 7 March 2014 by Member of Parliament for South Cambridgeshire and Leader of the House of Commons Andrew Lansley CBE, and Minister for Universities and Science David Willetts, has given the seal of approval to the company’s 25,000 square metre expansion programme at its Granta Park headquarters.

‘The government is right behind TWI in its work to deliver specialist skills in structural integrity and materials joining into industry. I am very proud to be a part of a success story focused on the core technologies that are vital for our economic growth.’
Andrew Lansley CBE MP

﻿Andrew Lansley and David Willetts, accompanied by Vicky Ford MEP and Sir John O’Reilly, the government's Director General of Knowledge and Innovation, visited the South Cambridgeshire premises to lead a site ceremony alongside TWI Chief Executive Christoph Wiesner and staff member Sarah Preston to mark the end of the steel construction phase of the build programme.

The ceremony, which included lowering into the ground a friction-stir welded capsule containing examples of research and innovation in materials joining and structural integrity technologies, was held in front of invited guests from the region, the design and build teams, government funding bodies, and partners representing the new National Structural Integrity Research Centre.

David Willetts said:
‘I am delighted to see the new Centre making such good progress and to be present to celebrate an extraordinary success. We have a need for R&D centres that stand between academic research and business. TWI began this process as a research association shortly after the war and has continued to deliver as a modern-day Catapult, becoming ever bigger and stronger. I applaud the company in its fantastic achievements.’

Following the burying of the time capsule, the event concluded with a short tour of TWI’s engineering laboratories to see examples of project work in structural integrity and inspection technologies, followed by cutting of a ceremonial cake - a small-scale replica of the finished buildings.﻿