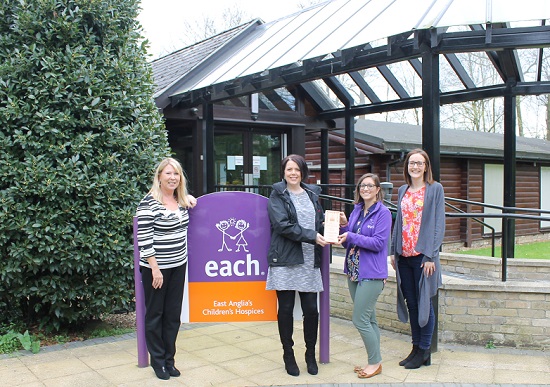 Granta Park is paying for a day of care and support from East Anglia’s Children’s Hospices (EACH) across Cambridgeshire today. The science and technology estate, based in Great Abington, raised £5,371.82 at its Santa run in December.

The event has been held for EACH since 2014 and this year featured an added twist as Rudolph joined the 2.5km (1.6-mile) race, with the 242 Santas involved tasked with retrieving candy canes he had taken from Santa’s workshop.

Proceedings also included Christmas carols performed by children from Great Abington Primary School, a special Santa bake off and a Christmas present collection for children supported by EACH.

The money raised was enough to fund a day of services the charity provides for children with life-threatening conditions and their families across Cambridgeshire – which costs £5,300 - at its Milton hospice, at families’ homes and in the community.

Tracy Thomas, Granta Park Operations Manager, said: “The Santa run is a very popular event with the employees based on Granta Park. We’d like to thank the 24 teams that took part this year, in particular Vinci Coureurs, our construction partner on two major expansion projects on Granta Park, which raised the most amount of sponsorship leading up to the event.”

To mark Granta Park’s fundraising success, Tracy along with Sarah Mason from Vinci visited the hospice today for tea, cake and the presentation of a commemorative plaque.

Karen Newton, EACH Cambridgeshire Fundraising Manager, said: “A massive thank you to the staff at Granta Park. We’re absolutely delighted with their efforts and hope to continue working with them in future.

“Support from organisations in the community like this is invaluable as we need to bring in more than £5 million from fundraising each year.”

Granta Park was launched in 1997 and is jointly owned by BioMed Realty and TWI, and managed by Bidwells. The park is home to leading companies such as Medlmmune, Pfizer and PPD.

For more information about it go to www.grantapark.co.uk and for more on EACH visit www.each.org.uk.