Heathrow to Gatwick in 15 minutes! HS4 could make it possible 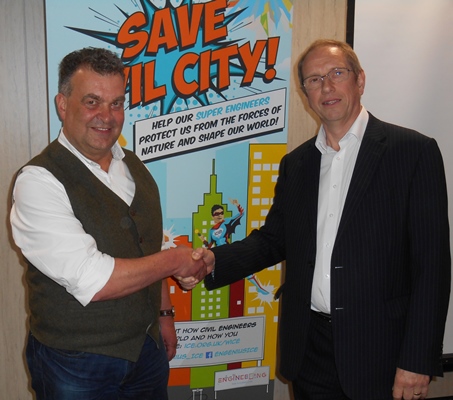 Better Euorpean connections and 15 minutes between Heathrow and Gatwick would be possible with another high speed rail link. This was the plan presented during Pitch 200, a competition of ideas and concepts to help people understand the value of civil engineering.

Pitch 200 challenges contestants to present an idea or concept in exactly 200 seconds. It has been run around the country by the Institution of Civil Engineers (ICE) as part of its bicentenary celebrations. The East of England heat took place at the Doubletree by Hilton Hotel, Cambridge on Wednesday (9 May).

Alistair Lenczner used his 200 seconds to present ‘Joining up the UK’s Infrastructure to Maximise Investment Value’. The HS4 Air, a high speed rail line linking HS1 and HS2, would reduce traffic congestion and effectively make Heathrow and Gatwick one airport .

He said  the lack of a UK infrastructure plan means projects are completed in silos without a big picture overview. Poor communication between Government departments and agencies has led to a fragmented approach. Other countries have a 30 year infrastructure plan including all modes of transport. This majority of European countries have trans-national rail lines linking airports and capital cities unlike the UK which lags behind.

The judges were impressed with his concept, making him the winner with a place in the grand final in London on 26 November.

The other presentations included:

ICE is an international membership organisation that promotes and advances civil engineering around the world. ICE is a qualifying body, a centre for the exchange of specialist knowledge, and a provider of resources to encourage innovation and excellence in the profession worldwide. Contact: iceeastofengland@ice.org.uk - t: +44 (0)1223 842067