i-Teams at the Science Festival – novel ideas for new inventions! 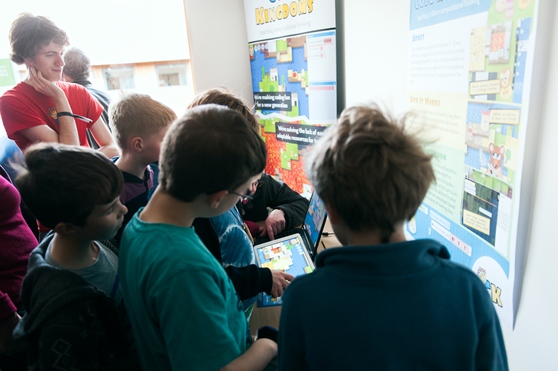 Using moss to power fairy lights and allowing pigs to reach their food through a catflap were some of the bright ideas for scientific inventions in the 'What would you use THAT for?' competition at the Cambridge Science Festival.

The competition was run at the Institute for Manufacturing during the Cambridge Science Festival as part of the i-Teams demonstration of recent and future products based on real scientific inventions. Entrants were asked to submit ideas for how these might be used in real life.

Demonstrations included a super-accurate timer from Qumet Technologies and novel laser inks from Illumink, both of which are start-ups from the Royal Academy of Engineering’s Enterprise Fellowship scheme.

Other demonstrations included Moss FM – a new technology which is under development for generating electricity from moss, and powering products such as digital clocks and radios. Also on display were the Light Blue Optics interactive projector which turns any surface into a touchscreen, and the widely-available SureFlap catflap which identifies cats from their microchip ID tags.

Amy Weatherup, competition organiser, said: “This is the fourth year of our competition and the busiest year yet. We had nearly 100 wonderfully imaginative entries, and we very much enjoyed reading through them.”

And the runners-up were:

The winners will receive prizes from two other demonstrators at the event – CodeKingdoms develops computer games that teach children how to write software code while they play, and TechnologyWillSaveUs produces electronics kits to allow children build gadgets ranging from games machines to working speakers and electronic music makers. It also provides Electro-Dough kits which uses conductive play dough to teach children about electric circuits.

Winners and runners-up will receive a special certificate of their award-winning idea. Amy thanked all the companies who kindly provided demonstrations for the event.

The Institute for Manufacturing (IfM) provides a unique environment for the creation and sharing of new ideas and approaches to modern industrial practice.