IFA Jon Clarke, seeks sponsorship in his bid to raise £5,600 for children's charity EACH 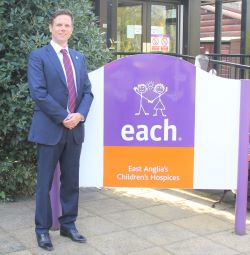 Jon Clarke of Martin-Redman Partners is competing for Great Britain in the World Triathlon Championships in Laussane, Switzerland in August 2019. He's offering companies sponsorship spaces on his GB kit .

One hundre pere cent of monies raised will go to children's charity EACH, which provides care and support to families while they go through unimaginably difficult times.

There are three logo or name spaces available on Jon's GB kit – the highest three bids received will appear on Jon's GB Competition kit and GB Training kit. Any companies or individuals outside the top three will have their name or logo printed on his GB Training kit as a thank you, which Jon will wear during his run and swim training in and around Cambridge.

Martin-Redman Partners is funding Jon's event entry and cost of his Team GB kit - Jon is looking for others to help him reach his fundraising target of £5,600 which would pay for the running costs of EACH in Milton for a one day.

The highest company bid received to date is £500 from a large, Cambridge-based firm. Jon's is hoping to raise a few more bids for EACH before sponshorship closes in two weeks time at the end of May.

In return for your warm donation to EACH you will receive:

“What a fantastic opportunity this is for Cambridgeshire businesses. We feel privileged Jonathon’s giving up valuable sponsorship money to help our work caring for children and young people with life-threatening conditions, and supporting their families, and wish him all the very best in Lausanne.” Emily Rose, EACH Cambridgeshire Corporate Fundraising Assistant

We provide independent financial advice on investments, pensions, inheritance tax planning and protection. We work with private individuals, businesses and professional introducers, such as accountants and solicitors, to ensure our clients financial advice needs are met.