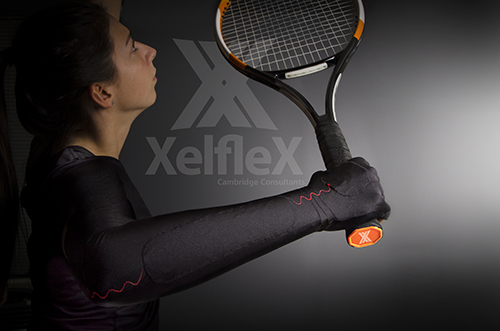 Breakthrough optical technology from product design and development firm Cambridge Consultants has led to the creation of a new generation of wearable technology. XelfleX is a novel type of ‘smart’ textile that turns garments into active motion sensors. It can be used to make comfortable, washable, robust clothing – and gives users information not available from existing wearables.

Until now, smart fabrics have had multiple electronic sensors – making them cumbersome and sensitive to moisture. What makes XelfleX different is its fibre-optic thread which acts as the sensor – making a garment inherently smart. The only addition required is a small electronics pack which clips on to the fibre – in a pocket, for example – and communicates with a smartphone.

The technology could be used for fitness and sports coaching – to help perfect a tennis serve, golf swing or ski technique, for example. It could also be used as part of physiotherapy to help patients recover after injury, surgery or neurological problems. Or it could be used for motion capture for gaming, film making and virtual reality applications, thanks to its ability to make multiple accurate angle measurements.

“Our aim was to create wearables that people actually want to wear,” said XelfleX inventor Martin Brock, of Cambridge Consultants. “With XelfleX, the garment itself is the sensor and it allows you to create smart clothing that is low-cost, durable, useful and attractive to wear.”

XelfleX builds on Cambridge Consultants’ extensive experience in industrial fibre-optic sensors and low-cost impulse radar. When a pulse of light is transmitted down an optical fibre, a very well-defined amount of light is scattered continuously along its length. Bending the fibre results in increased scattering and reflection, which can then be measured.

By integrating the fibre into a close-fitting garment, the movement of a joint can change the amount of bending at a defined sensor point in the fibre. Up to 10 sensors are possible along each fibre – with the initial light pulse sent by an LED in the electronics pack. Algorithms then turn the results from the sensors into guidance that users can easily understand, giving feedback on their posture and movement, and coaching them on how to improve. It’s the latest example of how technology can bring advanced sport technique training within the reach of any athlete.

“XelfleX demonstrates the benefits of our ‘cross-fertilisation’ of technology between very different sectors – it’s at the intersections between industries that innovation often happens,” said Brock. “We’ve combined our extensive experience in wearable technology with our deep knowledge of industrial sensing and control to come up with a smart system design for a new generation of wearables.”

Cambridge Consultants will be demonstrating XelfleX, together with other innovations such as the KiCoPen concept – a connected injection pen powered without a battery – at the 2015 International CES, January 6-9, in the Las Vegas Convention Center, stand 74224.