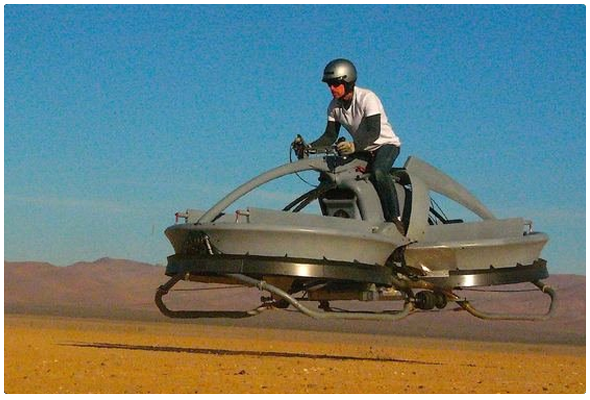 Sci-fi fans buzzing at the development of a Star Wars-style speeder bike that lets you fly like a Jedi can rub shoulders with the inventor at the Nerve disruptive technology summit in Cambridge this summer.

Flying bike innovator Mark De Roche wings in from California after a series of successful test flights with the futuristic vehicle in the Mojave Desert.

His aim has been to make personal flight as intuitive as riding an ordinary bicycle. Mark is founder of Aerofex in Manhattan Beach, California, and the company’s breakthrough technology has already piqued the interest of the military.

The vehicles could act as handy first-responder craft; a small fleet could be transported in the belly of a passenger transporter. Troops could patrol borders without having to build roads – a nightmare infrastructure problem in war zones and other tough territories.

Aerofex also believes the vehicles could be used for heavy lifting in these rough terrains, without having to fret about wheels or caterpillar tracks. And, unlike helicopters and other flying devices – and very much in Star Wars mode – this vehicle has demonstrated flight between trees, close to walls and under bridges.

The flying bike doesn't use anti-gravity devices but powerful fans and a special control scheme that allows anyone to drive it without any training.

De Roche says: “At Aerofex we cross industry sectors to bring the magic of aero-technology to the limitations of the conventional approach. We have an established track record.

“Aerofex has participated in cutting edge experimental aircraft and spacecraft programs that push the boundaries of the imagination. We honed our skill-set and processes through development of approved flight structures for the air-transport and motion picture industries (remember 'Die Hard'?), as well as commercially successful products in the action sports industry.

“Aero products today perform beyond the dreams of futurists just decades ago. The downside is complexity. Design Integration is an engineering specialty designed to address this complexity, and one of Aerofex core capabilities.

“Whether we are integrating a payload to a spacecraft, a laser in an aircraft, or a sensing system on a UAV, Design Integration insures the systems mate and function as designed.”

To date Aerofex has produced over 140 flight quality composite components that have flown on developmental aircraft.

We are creating exciting technology that will change the way people perceive and utilize flight.

“We are developing manned craft and unmanned aerial vehicles that have real utility. Our goal is to break the barriers that limit access to the benefits of flight.”

You can follow De Roche and Aerofex’ journey in person at Nerve – Cambridge UK from June 25-27, 2013. Book your tickets at www.itsnerve.com