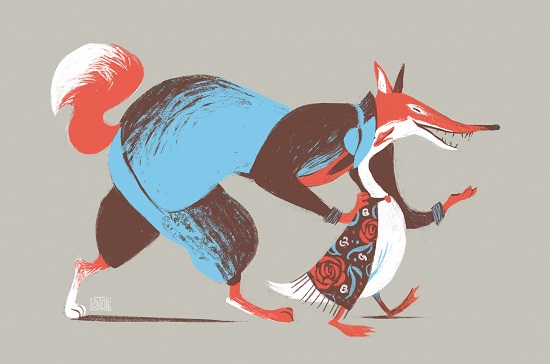 Beatriz, who is originally from the Galicia region of Spain, now lives in Cambridge where she studies on the Children’s Book Illustration masters course at Anglia Ruskin.

The Beatrix Potter Reimagined competition was organised by the Lakes International Comic Art Festival, and the winners were announced by Darren Henley, Chief Executive of Arts Council England.

The competition called on art students to reinterpret or reimagine Beatrix Potter’s books or characters, and Beatriz impressed the judges with her digital piece titled ‘Fooled’  (above) based on The Tale of Jemima Puddle-Duck.

One of the judges, Stephen L Holland, said: “‘Fooled’ has instant impact, both emotionally and on the eye through cool water and livid fire colours representing innocence and tranquillity then action and danger, respectively.  That is a narrative in and of itself, but there’s the additional element of power and seduction in the composition.

“I also adore the updated fashion which is chic – and possibly Spanish? – the weight, the elegance, but the emphasis on narrative in all its elements is what totally wins this for me.”

Beatriz said: “I heard about this competition from my tutors in the Cambridge School of Art and I’m absolutely delighted that I entered.

“My artwork ‘Fooled’ comes from The Tale of Jemima Puddle-Duck.  I tried to capture the spirit of the story in a single piece of art and I’m so pleased the judges enjoyed it.”

The 23-year-old’s work will be on display in Kendal Library, alongside the other competition entries, until Friday, 28 October.

Julie Tait, Festival Director, said: “Beatrix Potter Reimagined was a fantastic opportunity to celebrate this amazing Lake District artist and storyteller and reach out to a new generation of artists.”