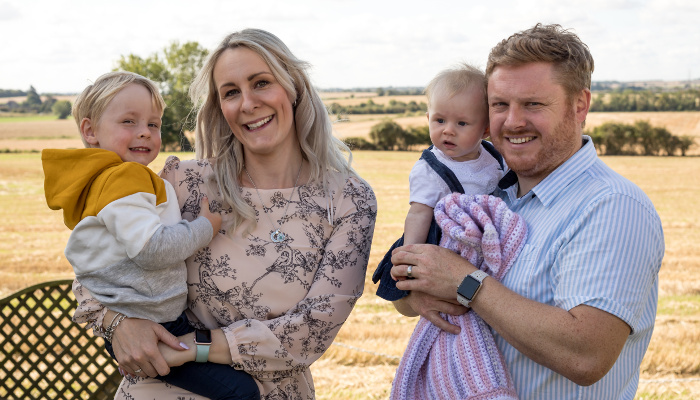 “I feel so lucky to have my two children,” says Hannah from near Huntingdon, who is sharing her story ahead of Mother’s Day to raise awareness of infertility.

"I felt really lonely and really struggled when I was the only one of my friends who couldn’t get pregnant and now my life feels really full."

Hannah’s two children Emmett (aged 3) and Rosalie (aged 11 months) were both born after she had fertility treatment at Bourn Hall Clinic.

Hannah and her husband Philip’s fertility journey began after they got married in 2011.

“We both really wanted children and had no reason to think that we might struggle to conceive,” says Hannah. “But after three years of trying nothing had happened. All around me my friends were getting pregnant and I couldn’t understand why it wasn’t happening for us.”

Dr Thanos Papathanasiou, Medical Director at Bourn Hall Clinic, says that eighty per cent of couples will become pregnant within one year of trying so couples who have been trying for longer than this should seek advice: “Fertility declines with age and many couples can be helped to conceive naturally with lifestyle advice and simple medication; so it is important to seek advice when you are younger and have more options,” he says.

Hannah and Philip went to see their GP and were referred to Hinchingbrooke Hospital for tests.

“Philip’s tests all came back fine but mine showed up that I wasn’t ovulating properly,” says Hannah. “I was also told that my ovarian reserve was slightly lower than normal.” The hospital put Hannah on Clomid to stimulate her ovulation in an attempt to help her fall pregnant naturally but the couple still didn’t conceive and were told that the next step for them would be IVF.

Fortunately, for Hannah and Philip this was before the Cambridge and Peterborough Clinical Commissioning Group stopped NHS funding for IVF.

Hannah says she would have been devastated if she hadn’t been able to have treatment: “It is absolutely heart-breaking and I feel terrible for all those people who don’t have that option now.”

For their NHS-funded IVF treatment Hannah and Phillip choose to go to Bourn Hall Clinic near Cambridge, which was the world’s first IVF clinic and celebrates its 40th anniversary this year.

Bourn Hall has always treated NHS patients, as well as self-funded patients. It has won the NHS tender processes successively since 2009 and is the only approved provider for NHS funded IVF with clinics in the East of England. Patients living in those areas which still fund IVF (Norfolk, Suffolk, Bedfordshire, and parts of Essex) can have NHS funded treatment at Bourn Hall.

Hannah and Philip had their first treatment at Bourn Hall at the end of 2015. “I remember taking our dog for a walk after the treatment and just looking up to the sky and whispering to myself ‘please, please let it have worked,’” recalls Hannah.

“After the 14-day wait me and Philip took the pregnancy test together and when it was positive I was just shaking. I went in to work and my colleague says she knew immediately that I was pregnant because I just had an ‘aura’ around me!”

Hannah gave birth to son Emmett in August 2016. The couple were keen to have a second child and after further treatment at Bourn Hall Clinic they had daughter Rosalie in April last year.

“I can’t really put in to words how happy being a mum makes me feel,” says Hannah. “I have got such a lovely family, Emmett is a proper little person now who says things which really make me giggle and he will be starting school this year and Rosalie is lovely and bubbly always clapping her hands and smiling. I feel so grateful to Bourn Hall.”

Fertility tests can help give people struggling to conceive with answers and speeding up this process can be important for emotional health as well as helping with understanding the options.

Since Hannah and her husband had IVF treatment, Bourn Hall has launched a free GP-referred six-week fertility diagnosis and treatment service, which includes carefully monitored ovarian stimulation and this can help improve the chances of natural conception. Free fertility advice from a Bourn Hall fertility nurse specialist is also available to everyone.

For further information go to bournhall.co.uk