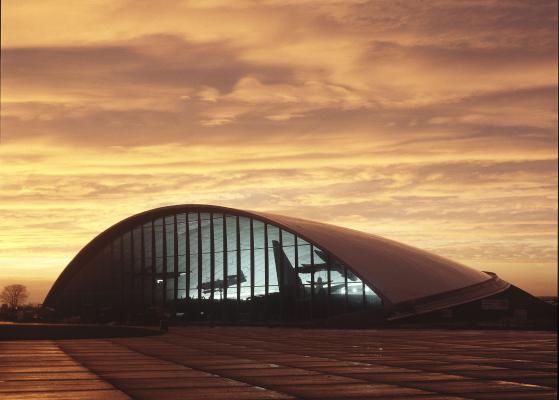 The American Air Museum at Imperial War Museum Duxford, Europe’s largest air museum, has been listed at Grade II* by the Department for Digital, Culture, Media and Sport (DCMS) on the advice of Historic England.

The memorial glass sculpture ‘Counting the Cost’ that lines the approach ramp leading to the museum entrance (pictured below) is part of the listing.

The American Air Museum was purpose-built at IWM Duxford between 1995 and 1997 to exhibit Imperial War Museums’ collection of American military aircraft, widely regarded as the most impressive group outside the United States. IWM Duxford is considered Britain’s best-preserved Second World War airfield, from which historic and contemporary flying continues today.

The American Air Museum at IWM Duxford was designed by renowned architects Foster + Partners in collaboration with Ove Arup and Partners as consulting engineers. Although not yet 30 years old, the museum is considered an outstanding and innovative architectural site and won critical acclaim in 1998 when it was awarded the RIBA Stirling Prize.

Norman Foster is one of England’s most internationally acclaimed modern architects and this building serves as an excellent example of his work, anticipating many of his later designs. The striking design highlights Foster’s passion for architecture, as well as his interest in flight. The curved concrete roof, inspired by the stressed skin structure often seen in aircraft construction, together with its ring-shaped geometry resembling the cockpit of a modern fighter jet, act as aeronautical metaphors in a dramatic yet simple way. Its resemblance to a Second World War blister hangar also adds to Foster’s flying symbolism.

While the geometric features Foster + Partners used made the structure simple to manufacture and build, the use of open space and a mezzanine makes for a functional, visitor friendly exhibition space. IWM Duxford is a former RAF and United States Army Air Forces station, with many of the original historic structures listed. Recognised as the best-preserved example of a Second World War fighter base in Britain, IWM Duxford is the perfect location for Foster + Partners’ hangar.

The American Air Museum’s displays not only acknowledge the emergence and dominance of US air power during the 20th century, but also pay tribute to the 30,000 airmen who lost their lives flying out of British bases during the Second World War with Renato Niemis’ evocative memorial sculpture, ‘Counting the Cost’. ‘Counting the Cost’, which is made up of 52 large glass panels engraved with cross-like silhouettes of the 7,031 American aircraft that were lost on operations, evocatively resembles both the massed formations of aircraft and the regimented lines of a war cemetery.

The minimum age for a site to be listed is typically 30 years. However, due to the high level of architectural and historic interest, the American Air Museum matches the prowess of Foster’s Spectrum Building and Sir Nicholas Grimshaw’s Western Morning News Building, both of which have been awarded Grade II* status in recent years.

Duncan Wilson, Chief Executive of Historic England, said: “The American Air Museum at Duxford is an outstanding building, with a geometric construction that makes it the most complicated of all Foster’s work. Its smooth, sweeping form is expertly designed to complement IWM’s amazing aircraft collection. It is important to recognise and protect the work of architects like Foster who have helped to shape much of England’s modern landscape and this site is special for the stories it tells about 20th century air combat.”

Heritage Minister, Nigel Huddleston, said: "This listing demonstrates that the American Air Museum at IWM Duxford is both a stunning example of modern architecture and, alongside the 'Counting the Cost' war memorial sculpture, an important memorial to those serving in the Second World War. I'm pleased that we are able to recognise the museum's architectural and historical significance and remember those who paid the ultimate sacrifice by protecting this site for future generations."

John Brown, Executive Director of Commerce and Operations at IWM, said: “We are delighted that the innovative design and architectural significance of the American Air Museum has been recognised through a Grade II* listing. The American Air Museum tells a hugely important story in not only the history of IWM Duxford, but of the allied forces during the Second World War, highlighting the contribution that thousands of American service men and women made to the conflict. We needed the building that houses those fascinating stories to be a fitting testament to their service, and that was definitely achieved.”

Norman Foster, Founder and Executive Chairman, Foster + Partners said: “It is wonderful news and we are all delighted that the importance of this building has been recognised by this listing. Between 1943 and 1945, Duxford was an American airbase for significant numbers of American airman who lost their lives in the War. In that spirit, the building is both a museum and a memorial – the entrance is respectful, as if entering a tomb, which opens up to an airy, hanger-like space.

The curved-torus roof form is generated in part by the largest aircraft in the collection, the mighty B-52 bomber. Spanning 90 metres, the roof shell is made of two layers of concrete that can support a point load of up to twelve tonnes, with the central space looking onto the active runway. The collection and the architecture together, are a celebration of flight.”

IWM Duxford reopened to the public on Thursday 3 December. In addition to the American Air Museum, visitors can also step foot into the former nerve centre of RAF Duxford in the newly opened Ops Block: Battle of Britain and explore the transformed Battle of Britain Exhibition in Hangar 4 during this 80th anniversary year since the decisive aerial campaign. The temporary exhibition, Captain Sir Tom At 100, is also open to visitors in Land Warfare Hall with the chance to get up close to a selection of his birthday cards and discover more about what Captain Tom would have experienced during the Burma campaign in the permanent ‘The Forgotten War’ exhibit. 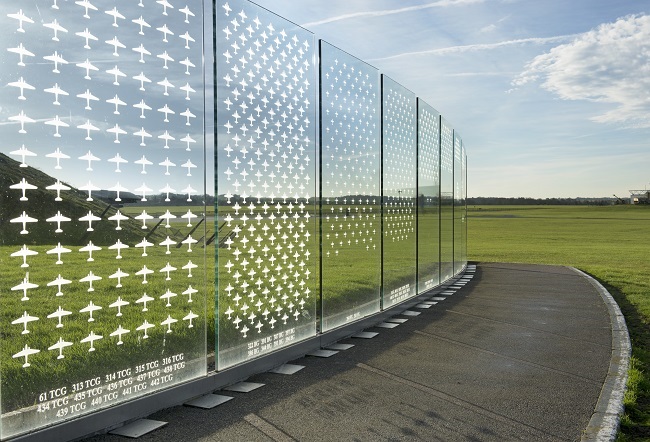 IWM Duxford is Britain’s best-preserved Second World War airfield, with a fascinating history that dates back to the First World War. Historic aircraft can regularly be seen taking to the skies from Duxford’s wartime airfield. Duxford has been a witness to world-changing events over the past 100 years where ordinary people have had extraordinary experiences. Exploring state of the art exhibition halls and historic buildings, visitors walk in the footsteps of the men and women who served at RAF Duxford. Through the powerful stories of the men and women involved and the rich displays of aircraft we tell the story of the impact of aviation on the nature of war and on people’s lives.

Open Wednesday to Sunday (last entry an hour before closing):