Kick-starting the genome in early development 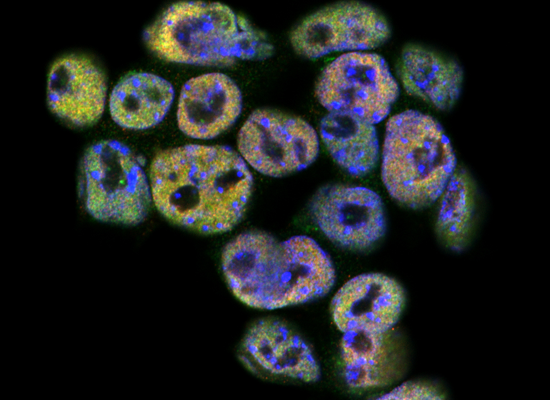 We can think of the egg and sperm as information capsules with stored instructions for starting a new life, but post fertilisation, what kick starts the interpretation of these instructions?

After the fertilisation of an egg cell, two become one; two sets of genetic information combine to form a genome. We can think of the egg and sperm as information capsules with stored instructions for starting a new life, but post fertilisation, what kick starts the interpretation of these instructions?

Researchers at the Babraham Institute have provided further pieces of the puzzle by using a rare subset of mouse embryonic stem cells that provide a ‘lookalike’ system to the two cell embryo (zygote) occurring 24 hours post-fertilisation in pregnant mice. This is the stage at which the zygotic genome is normally activated. Using these cells, called ‘2C-like’ cells, the researchers could probe the hierarchy of molecular events taking place to initiate the zygotic genome. Their research findings are published in the journal Genes & Development.

Poetically, waking up the genome occurs through events called the minor wave and major wave. Researchers knew that a transcription factor (a protein that binds DNA to promote expression) called Dux activated a range of genes in the second major wave but not what initiated Dux or the genome activation in the first place.

“Genome activation is the first thing that the embryo has to do,” says Dr Melanie Eckersley-Maslin, a postdoctoral researcher at the Babraham Institute. “Despite it being crucial to the formation of the embryo, we know surprisingly little about it. The 2C-like system provides an experimental approximation of those very early embryo cells and allows us to use the full arsenal of research techniques available to tease apart what is happening.”

The researchers started by screening for factors that increased the number of the rare 2C-like cells in a population of mouse embryonic stem cells – indicating positive factors that were able to promote genome activation. The researchers identified two proteins called Development Pluripotency Associated 2 (Dppa2) and 4 (Dppa4).

“Looking at what we have discovered about Dppa2 and Dppa4 they fit the profile of being responsible for kick-starting the expression of the new genome,” explains Dr Eckersley-Maslin. “The proteins are already present in the egg, so already there before the new embryo is formed, and if we delete the Dppa2 and 4 genes from the genome, we see a loss of 2C-like cells and the loss of the Dux-initiated wave of genome expression.”

The model proposed by the research connects genome activation with epigenetic reprogramming of the cells that eventually form the sperm and eggs, forming a connected chain of events that secures Dppa2 and 4 expression in egg cells ready to initiate genome activation when the time is right

“Looking forward, it will be interesting to uncover the details of genome activation in human development as this is an unexplored area,” commented Professor Wolf Reik, Head of the Epigenetics research programme at the Babraham Institute and associate faculty member at the Wellcome Sanger Institute. “Understanding more about regulators of the genome in early life is also relevant to situations where we wish to revert cells to their early-life state, such as in generating induced pluripotent stem cells for future therapeutic uses.”

The Institute is an independent charitable life sciences institute, sponsored by the Biotechnology and Biological Sciences Research Council.