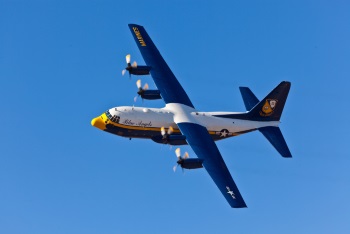 Marshall Aerospace and Defence Group today announced it has been awarded the contract to support the entry into service of the new replacement for the Blue Angels’ iconic Fat Albert, the C-130 support aircraft to the US Navy’s air display team.

Marshall will carry out the maintenance, paint and minor modifications to the US Navy’s replacement ‘Fat Albert’. The aircraft is a C-130J that the US Navy recently purchased from the UK Ministry of Defence to replace the C-130T that the squadron used for 17 years until May this year.

Marshall is the global leading C-130 support company outside of the USA and was chosen for its proven expertise with C-130 modification, repair and overhaul (MRO) work and the speed with which the company can make the aircraft operational.

“We are delighted that the US Navy has chosen us to work on the new replacement Fat Albert,”

“We have worked on Royal Air Force C-130s for 50 years and we support a number of international Air Force customers who have purchased surplus C-130s from the UK MOD. It feels like a natural progression for us, but very exciting nevertheless. Fat Albert is a head-turner and plays a major part in supporting the Blue Angels’ display team.”

“Our partners at the UK MOD and Marshall have been instrumental in executing this extremely challenging acquisition. We have always had a great partnership with the UK and this only adds to the list of ways we accomplish great things together.”

Marshall will perform depth maintenance on the aircraft, which will include an upgrade to some of its systems to align them to the retired Fat Albert. It will then be repainted in the Blue Angels’ iconic blue, yellow and white colours.

Fat Albert is expected to be operational in the first part of next year.